IDLES successfully reinvent their sound ahead of their upcoming fourth album.

Perhaps the forerunners of the post-punk revival that currently dominates the UK alternative scene, Bristolian five-piece IDLES first broke through into mainstream recognition following the release of their 2018 Mercury Prize-nominated second studio album, Joy as an Act of Resistance. Last year saw the release of the follow-up record Ultra Mono which, while it can by no means be perceived as ‘awful’, it came under deep fan criticism for sometimes superficial lyrics and a lack of progression from their previous releases.

Thus, the band had much to prove with ‘The Beachland Ballroom’, the lead single for their upcoming fourth record CRAWLER. The single sees the group transform into a jazz-tinged rock concoction, a sound which they had only briefly touched upon in previous LP tracks such as ‘Kill Them With Kindness’. 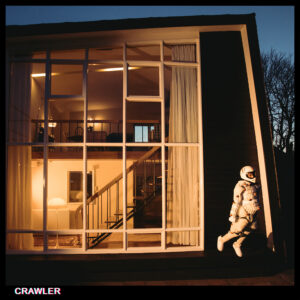 IDLES’ fourth album Crawler is set to be released on November 12th.

Noted to be “the most important song on the album” by frontman Joe Talbot, lyrically it focuses on a subject matter that has emerged across IDLES’ discography: anxiety. However, Talbot’s vocals truly stand out upon this release when combined with such lyrics – particularly in the case of the song’s closing pain-tinged shouting of “damage, damage, damage…”. When paired with the haunting fusion of synths and the occasional piano riff, it marks for a song certainly echoing many listener’s sentiments as the often-isolating winter months approach.

Perhaps a fan waiting for the ‘Danny Nedelko’, ‘Mr. Motivator’-style chant-along anthems would be disappointed with the soulful approach utilised within this release. However, such a return to past endeavours would certainly not allow the group to stand out from the aforementioned crop of post-punk artists that have sprung up since IDLES’ breakthrough, with the likes of Shame, Goat Girl and Squid all hosting their unique take on what the genre can mean.

The visuals for this release further allow the group to present themselves as not just musicians, but as art curators. Directed by the seemingly anonymous LOOSE, the exactly four minutes of footage accompanying the release present a sweat-drenched Talbot connecting directly with the viewer; only furthering the personal connection of his penned lyrics. The video is also marked as being merely ‘Pt. 1’, setting itself up to connect with a future release.

It is once again exciting to be a fan of the Partisan-signed group. It remains to be seen how far CRAWLER as a whole will deviate from IDLES’ past works, and I would certainly expect there to be a few of the band’s trademark catchphrase-laden anthems, but this release displays a rejuvenated group surely set to return to critical acclaim.

‘The Beachland Ballroom’ is out now via Partisan Records. Check out the video below: