Read more
You are at:Home»Records»Albums»‘One of 2022’s landmark indie releases’: A Review of Miles Kane’s Change The Show
By Callum Joynes on February 4, 2022 Albums, Records
100%
100
Fantastic

Miles Kane delivers perhaps the best album of his career thus far by utilising the past, but never simply retreading it.

You can never quite tell where indie hero Miles Kane is going to go next with his music. Since releasing his debut solo album Colour of the Trap in 2011 (following stints with The Rascals and The Last Shadow Puppets), Kane has gone from strength to strength. This became abundantly clear with the release of 2018’s Coup de Grace – a foot-stomping, 70s-glam inspired collection of crowd-pleasers at any of his manic live shows.

Almost four years later, Kane releases the follow-up, Change the Show. With this release, Kane takes strong inspiration from the jazz-tinged records of the 50s and 60s, yet while certainly still bringing them up to date with a cheeky indie flourish that can only be achieved by the Liverpudlian artist.

Kane opens with ‘Tears are Falling’, employing a slower, swaggering groove before launching into the bombastic chorus of ‘I’m tired of playing the fool’. It’s a surprisingly emotional track for an album that, for me, perfectly replicates the post-war freedom that existed in pop music of the 1950s. Yet, if there’s one thing to say about Miles Kane, it’s to expect the unexpected. 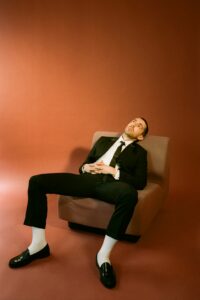 In the light of being ‘unexpected’, there is just a single other voice on ‘Change the Show’. This comes in the form of the rarely-seen (and incredibly underrated) Corinne Bailey Rae – she lends her vocals to ‘Nothing’s Ever Gonna Be Good Enough’, perhaps the catchiest track on the album, with both silky vocals blending together to create musical delight.

‘Never Get Tired Of Dancing’ is another highlight, perhaps drifting into later glam influences, and can be accurately summed up in one word: fun. Opening with a scream from Kane, the combination of a scuzzy guitar riff with a Vince Guaraldi-style tinkling piano is inspired, and the chorus of “Make this moment everlasting / cos I never get tired, get tired of dancing with you” is one that will certainly be stuck in my mind for the rest of the year. The backing vocals are also a particular highlight, generally being a contrasting higher, female voice to Kane, harking back to the likes of The Ronnettes and The Shangri Las.

When you focus an entire album on being inspired by a particular era of music, there is certainly a danger of fatigue from the listener; I have felt this way with the recent releases of The Weeknd and The Midnight. Yet, while someone with a strong dislike of 50s/60s pop music is unlikely to enjoy Change the Show, each song holds its own identity, meaning there is certainly enough variation to leave the listener excited to hear each and every track.

There is perhaps a worry that Kane relies too much on older works for Change the Show, and while this is largely the case for the instrumentation, it is the combination of this with Kane’s honest, relevant lyrics that make a point for it being one of 2022’s landmark indie releases. This is particularly prominent lyrically, as you can’t help but attribute it to the devastation of the COVID pandemic. Many of the songs, such as the title track, ‘Don’t Let It Get You Down’ and ‘Coming Of Age’ are odes to change and looking towards your future compared to your past mistakes – there is no better way to do this than by dancing to the groove of Miles Kane.

Change the Show is out now via BMG. Listen to the title track below: