It may have taken a while to arrive, but the wait was worth it: the gang's long-awaited debut excels in every corner, playing like a long summer of feelgood indie delight.

When you think of Brighton, you think of summer. Its infamous pier and beach are the mainstay of many British summer holidays, and its proximity to the Isle of Wight, Reading, and Glastonbury means it’s always an essential stopover as part of the summer festival circuit. So it’s not surprising that, from this sunniest of corners of the UK, one of the most effervescently upbeat indie bands in recent memory has risen to produce the most exciting and heartfelt record of the year so far, and quite possibly of the year to come.

The Magic Gang is an album years in the making. Forming as a bit of a side-project from other bands, the quartet of Jack Kaye (lead vocals), Kristian Smith (lead guitar), Angus Taylor (bass), and Paeris Giles (drums) rapidly rose to indie stardom with their 2015 double single No Fun / Alright – earning an “Introducing…” here at The Edge and landing them on many astute indie fans’ radars. Support slots alongside Wolf Alice and Circa Waves followed, along with a spectacular trio of EPs across 2016 and 2017 and two fantastic singles in ‘Your Love’ and the remastered ‘Alright’ in the summer and autumn of last year. But the underlying question has always been: where is the album? Finally, we have our answer. It’s here – and damn is it good.

True, there’s stuff on here that isn’t brand new. The aforementioned singles ‘Your Love’ and ‘Alright’ make the cut, alongside EP Three lead single ‘How Can I Compete‘. If you’ve already given those a listen, you know how delightful they are; telling tales of love rivalry, mixed signals, and lovesickness, all set to masterful instrumentation, they’re guaranteed to put a smile on your face and tug on your heartstrings in equal measure. But the fact that they’re far from the best cuts on the album shows you the strength of the record that The Magic Gang have put together. 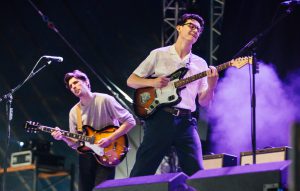 In essence, the gang have taken a long summer and pressed it to vinyl. All that entails – all the hot afternoons spent relaxing, all the festival nights spent dancing, all the time wasted (or not wasted) chasing love – finds its place somewhere on this record. Throughout it all, the signature Magic Gang sound we have grown to know and love persists, even as the band explore a range of influences, from the Beach Boys (‘Your Love’) to Frank Ocean (‘Take Care’).

So let’s start at the beginning. ‘Oh, Saki’ plays like the band warming up for one of those hot festival nights where you fall in love three different times but in the end find yourself lost in all the music. Sure, it’s repetitive, but Kris’ rough & ready guitar riffs and Paeris’ masterful work on drums keep you engaged and longing for more.

At this point, the first of three remastered tracks kicks in. ‘All This Way’, the best track of The Second EP From, along with ‘Jasmine’ and ‘All That I Want Is You’ from EP, find themselves given the festival hall treatment as drums are louder, basslines moodier, tempos upped, and choruses given more heart than since we last met them. Added guitar solos and layers of instrumentation make the tracks more exciting for first-time fans, whilst subverting long-time followers’ expectations for these songs, resulting in a truly awesome listening experience.

The long summer continues in subsequent tracks. ‘Slippin’ is a real festival crowd-pleaser that will have you grinning from ear-to-ear; ‘Getting Along‘ contrasts upbeat, eurphoric instrumentation with lyrics trading tales of heartbreak. But the real highlights of the album – and of the gang’s entire discography – are the disparate yet clearly Magic Gang trio of ‘Caroline’, ‘Take Care’, and ‘I’ll Show You’.

‘Take Care’ is probably the most surprising song the gang have ever released, but also their most mature. A real piano ballad, the slow-burn tune comes after 20 minutes of relentless indie delight, giving you a break from all the guitars, drums, and punchy vocals. That is, until its anthemic chorus kicks in and the track elevates the gang from just your average indie band to contenders for one of this decade’s best. Yes – it is that good. 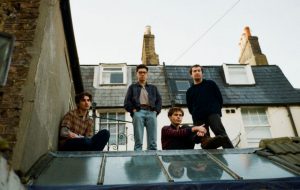 Also relying heavily on piano, though in an entirely different context, ‘I’ll Show You’ has you remembering back to all those times you were in love with someone you weren’t sure loved you back. The Magic Gang are masters at crafting indie music’s most heartfelt lyrics, but they’ve outdone themselves here; when paired with the gradually building piano and Kris’ perfectly balanced guitar, you have one of the greatest penultimate songs to any album.

And as for ‘Caroline’? That is just The Magic Gang summed up in four minutes, 14 seconds of musical goodness. If ever there was a song which used riffs and vocals so perfectly to conjure up images of summertime walks along the beachfront, BBQs in the back garden, and people falling in love in the festival fields, this is it. I can’t stop listening, and nor will you.

When the album finally closes – with a more impressive and absolute recording of debut EP‘s closing track ‘All That I Want Is You’, no less – you’re left with a kind of nostalgic melancholy. It’s not the kind that really gets you down, but rather the same feeling you get after a long summer filled with love, music, and revelry. Fortunately, this long summer is waiting for you to jump right back in to live all those late nights and lazy afternoons over again. With their debut album, The Magic Gang have shown that there’s always a way for indie music to put a smile on anyone’s face.

The Magic Gang is out on March 16th via Yala Records.