Read more
You are at:Home»Records»Features»Why Are Pop Songs So Obsessed With Love?
By Oliver Picken on February 20, 2022 Features, Records

It is surprisingly hard to think of many recent chart-toppers that have no connection whatsoever to love. Whether it’s a break-up anthem by Little Mix or a love ballad by Adele, it seems like there is no escaping being subjected to the same handful of topics played ad nauseam.

But why has the topic of love become such a mainstay in the commercial world of music? Firstly, this phenomenon is certainly not limited to just Pop music. A 2018 study conducted by Dimitar Bankov into lyrics by musical genre found that the word ‘Love’ was the most commonly used word across all genres included in the dataset, except for Hip-Hop/Rap and Heavy Metal. Looking solely at the data for the pop genre, ‘Love’ appeared a staggering 45,000 times in the dataset used. There’s simply no denying the prevalence of romance in popular music today! 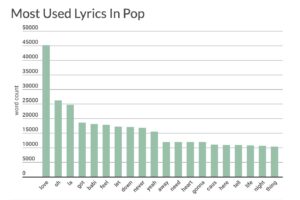 A graph showing the frequency of words in the lyrics for a particular dataset of pop songs – ‘Love’ is a clear winner. Credit: Dimitar Bankov/codingintune.com 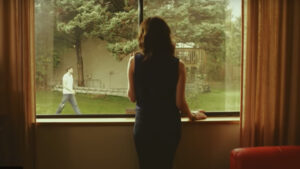 Musicians have been writing music in dedication to an out-of-reach infatuation for years, from Berlioz in 1830 to Rae-Jepson (above) in 2011. Credit: UMG/Youtube

Perhaps a quick detour into musical history may provide some clues. Music has been used as a medium for expressions of love since at least Medieval times, through the serenades that were often dedicated and performed in front of a lover as a gesture of their devotion. During the Romantic (not to be confused with romantic love) Era throughout the Nineteenth Century, music written about “strong emotions” became more widely composed and performed. The influential Symphonie fantastique (1830) by Hector Berlioz is an expansive work written in dedication to an actress named Harriet Smithson, after Berlioz’s countless love letters went unanswered. Similarities could definitely be drawn between Berlioz’ orchestral work and modern pop songs like Carly Rae-Jepsen’s ‘Call Me Maybe’, for they are similar in their subject matter presenting their passion for someone who is oblivious of their admirer’s existence, but written centuries apart. 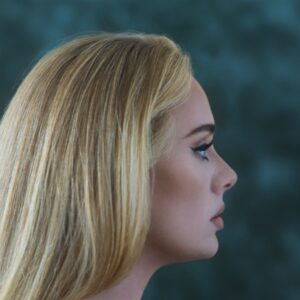 Adele (above) is by no doubt the queen of the love ballad. Via Sony Music Entertainment.

With this established relationship between love and music, is it really that surprising that the music industry today has come to rely on it? Songs that are about love or heartbreak are seen as the most accessible for listeners to relate to through their own personal experiences with love and are therefore easier to market and sell. Take Adele’s recent 30 – a stellar album from an artist who has built their career on an exceptional catalogue of power ballads such as ‘Someone Like You’ and ‘Rolling In The Deep’, and has been unanimously praised for its themes of divorce and self-love coming out of a long-term relationship. But as is expected from such a masterful songwriter, Adele does not feel tied down by cliché or convention and is able to express complex emotions of heartbreak and eventual acceptance through her creative, flowing metaphors and wordplay. These are themes that resonate with many people across the world, owing to Adele’s popularity as an artist who is able to speak on behalf of these people.

When releasing new material into an incredibly crowded market, there is nothing wrong with sticking with a convention that is tried and tested with your target audience. Although, it is important to remember that some of what are considered to be the greatest songs of all time were able to dodge any romantic allusions. Songs like Queen’s ‘Bohemian Rhapsody’, enigmatic in the meaning of its lyrics, have become classics in the canon of popular music without relying on love to sell records. Regardless, there will be no escaping love songs dominating playlists and radio stations in the foreseeable future, for it is a universal theme that can be applied to all ages and demographics.