In a double dose of festival news goodness, the kind people behind Reading and Leeds Festivals have added over 80 more names to the festival bill.

This morning, comedians including Harry Hill and I’m A Celebrity 2016 runner-up Joel Dommett were added to the lineup, whilst acts as diverse as Maggie Rogers and Linkin Park‘s Mike Shinoda were confirmed later in the afternoon.

One of the biggest names added to the bill this morning was the 2017 meme that refuses to die, Big Shaq himself. He’ll be making a special comedic performance at Leeds Festival only, and will be delivering a more music-heavy set on the main stage at Reading Festival only. The addition of Harry Hill to the lineup will likely add fuel to the concerns among fans of the festival that this year’s billing is turning out to be one of the most divisive in recent years, even if he is just one of a whole range of comedians – ranging from Skins‘ Joel Dommett to popular stand-up Seann Walsh and social media star Mo Gilligan (aka Mo the Comedian) – announced this morning. 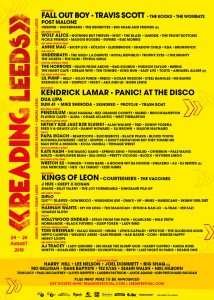 Besides the comedians, many talented musical artists have also been added to the festival bill. BBC Sound of 2018 runner-up Rex Orange County will be found spinning his wonderfully heartfelt teenage love songs on the BBC Radio 1 stage in a performance that will be sure to enthrall. Another act to keep your eyes on will be Maggie Rogers, Maryland’s most exciting export and the musician behind a wonderfully entrancing mix of dance, folk, and singer-songwriter melodies.

Meanwhile, look out for Linkin Park founding member Mike Shinoda on the main stage as he delivers an exciting mix of old and new following his Post Traumatic EP released earlier this year and the tragic passing of Linkin Park bandmate, Chester Bennington.

Away from the headline acts, artists like Sydney-based rockband DMA’S, hard-hitting singer-songwriter Sam Fender, and the immensely exciting rapper Yxng Bane were added to the lineup, but the vast majority of acts announced today lie in the festival’s usual stomping ground of rock. Alongside UK-based bands like Dinosaur Pile-Up, Blood Youth, King Nun, and Bloxx, many international groups – such as Canadian heroes Death From Above, Scandi outfit Royal Republic, and Nashville rockers Coin – found themselves on the billing.

Tickets for Reading and Leeds 2018 can be found here. Check out highlight’s of last year’s festival below: