Read more
You are at:Home»News»Global News»Gaming at a Glance: Never Tell Me the Odds
By Liana Dent on December 31, 2017 Global News, News

Welcome to the second round of Gaming at a Glance, your fortnightly review of what’s new in gaming!

Steamworld Heist has finally been released for the Nintendo Switch. But the release of larger game cartridges for the Nintendo Switch have been delayed until 2019, meaning we may have to wait longer for bigger games on the console. After this year’s huge successes, what will this mean for the Switch’s 2018 lineup?
And are loot boxes a form of gambling, or just harmless fun? Apple’s attempting to stay one step ahead of the drama (looking at you, EA) in its iOS games…

As of now, a new rule is in place for iOS game developers. Word of Apple decrees that gamers must be shown the odds of getting the rewards they want before they buy a loot box.

Often purchased in exchange for real currency, a loot box will give you new equipment or cosmetic items – but the quality of items you receive is randomised. This, many argue, constitutes a form of gambling. As loot boxes become an increasingly popular way for games to make money – for many free mobile games, it’s their only source of income – people are particularly worried about how much this is exposed to children.

Apple’s decision rises from the fallout of the controversy surrounding Star Wars: Battlefront II, released back in November. Loot boxes were initially planned to be a major part of the game. However, instead of items like cosmetics – which don’t affect gameplay – Battlefront II‘s loot boxes were filled with extremely powerful weapons and characters. Players who couldn’t afford many would be at a severe disadvantage to opponents who could. Even then, these people may need to purchase hundreds of loot boxes before the random element gave them the gear they wanted.

This sparked a massive outcry against Battlefront II‘s developer and publisher Electronic Arts. After unrelenting media coverage, badly-handled PR and thousands of outraged gamers seeking refunds, EA was forced to remove loot boxes from Battlefront II for the foreseeable future. But the damage had been done: EA lost billions due to bad publicity and lack of purchases.

Now, the controversy has sparked worldwide investigations into the ethical questions surrounding loot boxes. Do they really constitute a form of gambling? Should their undeniably addictive randomisaton be exposed to children without regulations? Apple is clearly deciding to sidestep any laws which might arise in the near future by making sure their mobile gamers know the odds ahead of time.

Despite enjoying a stunning 2017 lineup including Legend of Zelda: Breath of the Wild and Super Mario Odyssey, Nintendo Switch gamers might have to wait a little longer than expected for bigger game cartridges. Although 64GB carts were initially planned to be released towards the end of 2018, it’s been reported that we won’t be getting our hands on them until 2019.

The Switch uses tiny carts to stay small and portable. However, they only store 32GB, while its competitors use 50GB Blu-ray discs for their games. Sprawling Switch games require huge downloads to be playable. It might be a long wait before the Switch gets many more storage-heavy games. 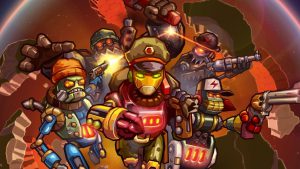 Of course, there’s always Breath of the Wild to tide Switch fans over until then… but if a break is necessary on your quest for 100% completion, try Steamworld Heist. First released back in 2015 on the 3DS. It was a stunning success, which took it everywhere from PlayStation to iOS, and 28th December finally saw its Switch debut. If you like sidescrollers, strategy, shooting, or steampunk space pirates (and why wouldn’t you?), then check it out on the Switch’s eShop.

Next time: The first big announcements in 2018 gaming! Will the Switch announce some more titles, or will its lineup stay small with the delay of larger game carts? Will there be yet more loot box drama? Do you think loot boxes are harmless fun (when not handled by EA, of course…) or should they see stricter regulations?