The US musician passed away surrounded by friends, family, and members of his band ‘Tom Petty and the Heartbreakers’ earlier today.

“We are devastated to announce the untimely death of our father, husband, brother, leader and friend Tom Petty,” said Tony Dimitriades on behalf of the family via Twitter. 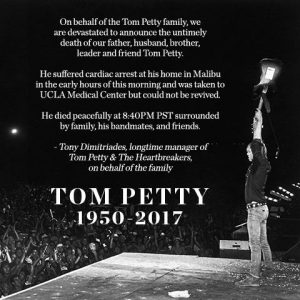 taken to UCLA Medical Centre but could not be revived.”

Petty has claimed that his musical career began in 1961 when he shook hands with Elvis Presley.  Less than 50 years later, in 2002, he was inducted into the Rock and Roll Hall of Fame.

He left school at 17 to play in the band Mudcrutch.  The band soon disbanded, but two of its former members joined Petty in forming ‘Tom Petty and The Heartbreakers’.

Dylan said of his bandmate of the 1980’s: “I thought the world of Tom. He was a great performer, full of the light, a friend, and I’ll never forget him.”