Read more
You are at:Home»News»Global News»Nostalgic News: The Perks of Being a Wallflower was released 5 years ago
By David Mitchell-Baker on October 3, 2017 Global News, News

Adapted from his 1999 book of the same name,the film adaptation of Stephen Chbosky’s The Perks of Being a Wallflower was released 5 years ago on 3rd October, 2017.

Grossing over $30 million worldwide, the film stars Logan Lerman, Emma Watson, Ezra Miller, Mae Whitman, Nina Dobrev, Paul Rudd, Johnny Simmons and Joan Cusack. It tells the story of Charlie (Lerman), the titular Wallflower with a troubled past, who, upon starting high school, meets the enigmatic and charming Sam (Watson) and Patrick (Miller) and finds his life soon taking a much different turn as the two take him under their wing and show him what life can really be like. 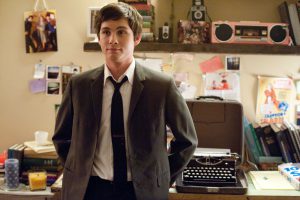 Originally planned as a comeback movie for famous 80s teen movie director John Hughes, Chbosky came on board to adapt the book to screen and utilised parts of Hughes’ original screenplay for the film, it was produced by the John Malkovich co-led Mr. Mudd Productions. The film garnered highly positive reviews at the time of release, even winning Chbosky an Independent Spirit Award for Best First Feature, and has since gained a cult like fanbase. Most of the praise has been directed at the lead performances of Lerman, Watson and Miller, Chbosky’s direction and the film’s poignant and touching depictions of love, friendship and mental health. The film’s soundtrack has also garnered significant popularity having included the likes of New Order, The Smiths and David Bowie.

The Perks of Being a Wallflower provides a truly heartbreaking and highly accurate portrayal of various different types of mental illnesses. In the years since its release Chbosky has spoken about this and his view on mental health on several occasions. In an interview with The Guardian in 2014, Chbosky said ‘At this point, after 15 years of receiving letters and also my own work in therapy and beforehand, I don’t see any stigma in any mental health issue. But I do know that for many great people, they are very ashamed to be struggling. Let’s take for example, depression. Depression is invisible. It’s an invisible scar.’ Chbosky originally wrote the book semi-autobiographically, in the years since its release he has been, and will likely continue to be, a passionate and important advocate for mental health awareness.

Check out the film’s trailer below: