After almost 50 years, Yoko Ono has finally been listed as a co-writer on John Lennon’s iconic hit, ‘Imagine’.

The listing was confirmed on Wednesday at a meeting for the National Music Publishers.  Ono, who had previously been named as a co-producer alongside Phil Spector, attended the meeting in New York which opened with a vintage clip of Lennon admitting that Yoko should always have been listed as a co-writer. 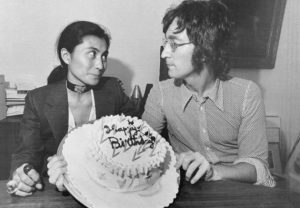 Yoko and John in 1971
Bettmann via Getty Images

In the clip, he is heard saying that: “a lot of [‘Imagine’] – the lyric and the concept came from Yoko.” He goes on to admit that in the days of the track originally being released that he was to selfish to acknowledge her contribution but that “it was right out of ‘Grapefruit’, her book.”  John and Yoko’s son, Sean Ono Lennon, later said that it was “the happiest day of [his]and [his]mother’s lives”.

The song was first released in 1971 (46 years ago) as a peaceful protest song and was the titular song on Lennon’s album Imagine.  However, the song went on to by his most iconic solo piece and has since been covered by famous artists including Eva Cassidy, Madonna and Lady Gaga.  It even featured in the 2012 London Olympics closing ceremony where it was covered by Emeli Sandé.

Remind yourself of the iconic hit below: