Read more
You are at:Home»News»Global News»Nostalgic News: David Bowie’s ‘The Rise and Fall of Ziggy Stardust’ was released 45 years ago today
By Sophie McEvoy on June 16, 2017 Global News, News

2016 took the iconic and legendary David Bowie away from us, but 2017 sees the 45-year anniversary – and celebration – of one of Bowie’s most renowned records, The Rise and Fall of Ziggy Stardust and the Spiders from Mars.

Released on 16 June, 1972, the record introduced the world to Bowie’s alter ego Ziggy Stardust, a bisexual, extra-terrestrial being who comes to earth to promote a message of hope to humanity in their last five years of existence. Ziggy became the definitive, stereotypical Glam rock star; full of hope and love whilst protruding sexually promiscuous ideals and drug intake.

Ziggy Stardust was an amalgamation of a number of things, but the character as a whole was a portion of Bowie’s personality. As with everything that Bowie produced, Ziggy Stardust produced a social commentary of the 1970s and the genre in which Bowie found himself in. Similar to that of The Who’s Tommy and Pink Floyd’s Dark Side of the Moon and The Wall, Bowie creates a character which is supported by a concept album that Bowie intended to eventually become a stage show and a subsequent television production. 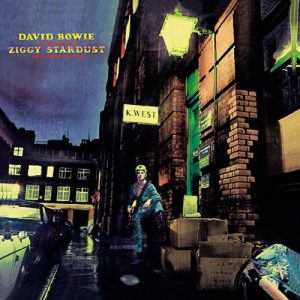 In a way, Bowie succeeded with this at his shows supporting The Rise and Fall of Ziggy Stardust. He didn’t walk on stage as Bowie; he walked on as Ziggy. He performed that stage show night after night, and believed whole-heartedly that he was spreading an important message through this narrative.

As Bowie states in Rolling Stone magazine: “The time is five years to go before the end of the earth. It has been announced that the world will end because of lack of natural resources. Ziggy is left in a position where all kids have access to things that they thought they wanted. The older people have lost all touch with reality and the kids are left on their own to plunder anything. Ziggy was in a rock-and-roll band and the kids no longer want rock-and-roll.”

Through this story, Bowie created one of the most highly regarded Glam rock concept records of all-time. Not only did Ziggy help scores of teens to find themselves through Ziggy – aka Bowie – but the completeness and revolutionary story Bowie created for the outcasts; a story that still speaks for teenagers and young adults to the present day.

Check out the iconic song below: