Sarah Lancashire, Adeel Akhtar and Joanna Lumley were amongst the winners at tonight’s BAFTA TV Awards. 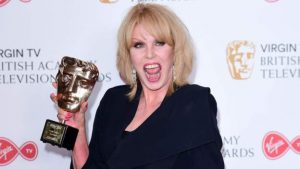 Lancashire won Leading Actress at the ceremony for her performance as Catherine Cawood in Happy Valley, beating off competition from The Crown‘s Claire Foy, while Adeel Akhtar triumphed in the Leading Actor category. Lumley won this year’s BAFTA Fellowship, which was presented by her partner-in-crime Jennifer Saunders.

Tom Hollander scooped Supporting Actor for The Night Manager, while Wunmi Mosaku won for Damilola, Our Loved Boy. Phoebe Waller-Bridge beat her co-star Olivia Colman to Female Performance in a Comedy Programme, for The Edge-acclaimed Fleabag.

It was a triumphant night for Happy Valley as it picked up Best Drama Series as well, while the hidden gem Damilola: Our Loved Boy took home Single Drama.

International – The People vs. OJ Simpson

Features – Who Do You Think You Are?

Scripted Comedy – People Do Nothing