Variety has confirmed Ewan McGregor is in talks to play Christopher Robin in Disney’s live action sequel to the Winnie the Pooh franchise.

McGregor has already been a part of Disney’s recent batch of live action remakes, lending his voice to the candlestick Lumiere in Beauty and the Beast.  With Christopher Robin being directed by Finding Neverland‘s Marc Foster and penned by Oscar-nominated Hidden Figures‘ co-writer Allison Shroeder, it isn’t hard to see why McGregor is keen to stay within Disney’s grasp. 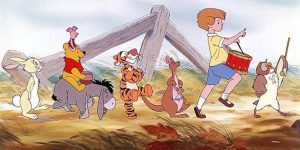 Still in its early stages, we don’t  know much about the film.  It will put a new spin on A.A.Milne’s beloved characters, seeing Christopher Robin all grown up, having lost the childhood imagination that first brought him to the Hundred Acre Wood. Luckily, Pooh and his friends come to the rescue, as they attempt to bring a bit of Disney magic back to Robin’s life. To be honest, a bit more Disney magic wouldn’t go amiss with us either.

Christopher Robin’s release date is currently yet to be announced. Check out Ewan McGregor discussing his role as Lumiere below: