Read more
You are at:Home»Film»Features»Notes on News: Should the young Dumbledore be openly gay?
By Sophie Jones on April 16, 2017 Features, Film, Global News, News, Notes on News

When J.K. Rowling first announced that Albus Dumbledore was gay, and in love with the dark wizard Gellert Grindelwald, she was met with a gasping, and applauding crowd of a full Carnegie Hall.

This confirmation came two years after the last book was published, following long running speculation on fan sites.  Now that both Grindelwald and Dumbledore have found their cinematic counterparts in Johnny Depp and Jude Law, and will both feature in the next instalment of the five-part Fantastic Beasts film series, it seems almost inevitable that what Rowling calls the “great tragedy” of their relationship will be explored.

But how important is it that Dumbledore’s sexuality takes centre stage in the new franchise?

Firstly, let us examine the series as it stands.  For what Rowling has herself described as a: ‘prolonged argument for tolerance’, the franchise has a surprisingly small amount of diversity in its characters.  In terms of people of colour, the number included in the whole series could probably be counted on two hands, at most two hands and a foot.  Disabled characters are nearly non-existent, represented solely in Mad-Eye Moody’s wooden leg and glass eye, and George Weasley’s maimed ear.  And as for LGBTQ+, Dumbledore is the only character confirmed to be anything other than straight.

All of Rowling’s argument seems to come, instead, from allegory, such as with Lupin’s lycanthropy being a metaphor for the AIDs crisis, and the Death Eaters’ KKK-like hoods and Nazi-like mindsets. Rowling has taught a generation to fight against Death Eaters, and pure-blood supremacists, to accept and relish difference and diversity.

I think it is time for her to practice what she preaches, and “question authority” like LGBTQ+ people do every day, with every kiss, every hand hold, every breath.  As Rowling herself wrote, “we must choose between what is easy and what is right”.

As a poor, unknown writer who did not put her feminine first name on book covers for fear of scaring off young male readers, this may have been understandable. Now that she is worth nearly a billion pounds, and her success is secured, she can no longer get away with hiding behind the skirts of metaphor and after-the-fact explanation-representations need to be justified and not token actions.

To her credit, she has so far delivered on this promise in the more recent times, such as casting Swaziland-born English actress Noma Dumezweni as Hermione Granger in the stage play Harry Potter and the Cursed Child. Now, in the same way, Rowling has the chance to show us a young, gay Dumbledore, who is unashamedly and unavoidably so. 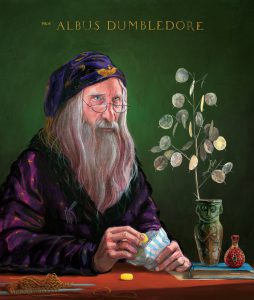 As Elayna Mae Darcy blogs on the fansite Mugglenet.com: “We have the chance to witness, in real time, a Dumbledore who is young and vivacious and who, hopefully, both acknowledges his sexuality and gives us a chance to see a well-rounded gay character in a mainstream blockbuster.”

So far, this kind of representation is hard to come by, especially in children’s films.  Only 17.5% of 126 major movies in 2015 contained LGBTQ+ identifying characters, according to GLAAD’s 2016 Studio Responsibility Index, and Disney has only recently included its first explicitly gay character in its film, finding it in Le Fou, a minor character of the live action Beauty and the Beast.

However, this has been met by backlash, as a cinema in Alabama boycotted the film, Malaysia’s censors asked for the scene to be removed, and Russia has given the film a 16+ rating.   We can probably assume that Warner Bros. fear similar backlash, but if no one pushes the barriers, we will never move past them.

Surely Rowling, who urged her fans ten years ago at Carnegie Hall to “question authority”, should be one of the people who pits her weight against the barrier? The LGBTQ+ community have been forced to walk the hard path just for existing.  A little magic to help us on our way is just what is needed.

Check out some of the cast reacting to the original news below: