As the final countdown for the newest Star Wars film, Rogue One: A Star Wars Story begins, a new teaser trailer, simply title ‘Breath’ has been released to mark the occasion. 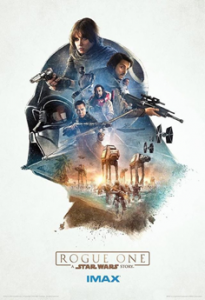 The tense teaser doesn’t feature much footage that hasn’t already been released previously but it is backed with the eerie breathing of Darth Vader and the ‘Imperial March’ which leaves the trailer feeling uneasy. Alongside this new trailer, several posters have been unveiled as well giving us another look at the now-familiar characters.

It was recently revealed by producer and visual-effects supervisor, John Knoll, that: ‘This takes place in a time that’s after the Jedi purge in Episode III and before Obi-Wan re-emerges and starts training Luke, and before Yoda gets involved. So this is a dark time when things are very bleak and the Jedi have not come back.’

This new trailer reflects the darker tone that Knoll says we can expect from the film, as it follows the Rebels and Jyn Erso as they fight to steal the plans for the Death Star.

Rogue One: A Star Wars Story will be released in UK cinemas on 15th December and on 16th December in the US. You can watch the new teaser trailer below.