Selasi, the cult-hero competitor from the seventh series of the Great British Bake Off is set to make an appearance at The Stags to as the special guest at Flamingo’s Hawaiian Launch Party.

On their Facebook page, Flamingo announced his appearance, saying: 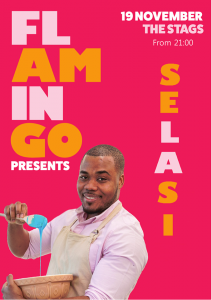 ‘Flamingo are proud to announce that we will be joined by our special guest SELASI from our favourite baking programme for the launch of our Saturday Sessions at The Stags!’ As part of his appearance, lucky competition winners will also get a chance to meet Selasi, and perhaps sample some of his baking.

Selasi gained fame on the most recent series of the Great British Bake Off. He was popular with the show’s viewers for his creative and relaxed baking style, which reflected his chilled personality and view on life. Although he ultimately did not win the series (being eliminated in the semi-finals), he became a cult figure for viewers because of his attitude and likability.

Selasi is at the Stags from 21:00 (9pm) on Saturday 19th November as part of the Flamingo brand launch. Check out the legend in action below: