A hearse has today appeared outside the BBC London headquarters to mark the ‘death’ of the popular baking context programme, which they lost to Channel 4 last month. 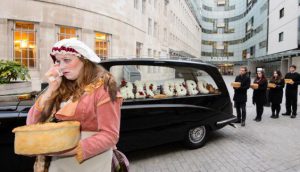 Image via The Standard.

The hearse was parked right outside the entrance, and carried inside it a coffin, on which floral adornments reading ‘RIP GBBO’ were rested. Alongside the vehicle, a classical Victorian cook and house-maid, carrying a ‘pie’ was accompanied by several ‘mourners’ dressed in full black and all carrying ‘baked goods’ to represent the show. While the mourners were clearly very upset, weeping and blowing their noses often, bemused onlookers were roped in to pose with the variety of ‘baked goods’ which they had brought with them, presumably for the ‘wake’.

The entire event was a stunt by The London Dungeons, who sent the car and the actors along. The BBC aired their final episode of the Great British Bake Off yesterday at 8:00pm, in which Candice Brown was crowned the winner of the seventh and final BBC series of the show, triumphing over Andrew Smyth and Jane Beadle. The series finale was also a record viewing figure for the show, peaking at 14.8 million people just before the winner was announced at 9pm.

Check out the final below: