Read more
You are at:Home»News»Global News»Sir Ian Mckellen shares first images of Lumière and Cogsworth from Beauty and the Beast
By Robert Pratley on August 29, 2016 Global News, News

Sir Ian Mckellen has released the first images of Lumière and Cogsworth from the live-action Beauty and the Beast film being released next spring. 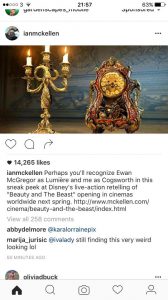 Sir Ian took to Instagram to reveal the new look for both Lumière and Cogsworth, who will be played by Mckellen and McGregor respectively. He also commented on the new outfits saying: “Perhaps you’ll recognize Ewan McGregor as Lumière and me as Cogsworth in this sneak peek at Disney’s live-action retelling of “Beauty and The Beast” opening in cinemas worldwide next spring.” The outfits in question heavily pay homage to Disney’s classic animated film, in which the roles were voiced by Jerry Orbach and David Ogden Siers respectively.

The images were also released by film co-producer Jack Morrissey, who posted on Facebook that: “These designs are close but may not be final.” He also confirmed that photos were promoting the sneak preview of the film which will be available on the 25th Anniversary edition of the animated classic which will be released in September.