Read more
You are at:Home»News»Global News»Notes on News: The rise to prominence of the streaming service original series
By David Mitchell-Baker on August 7, 2016 Global News, News

So the new Netflix original series, the supernatural mystery show Stranger Things, has become an instant hit with viewers.

I myself am yet to watch it, but the show has gained a huge fan base in a relatively short space of time, and has become yet another slam-dunk in Netflix’s long line of acclaimed original shows. So just what is it about these original shows from streaming services (mainly Netflix and Amazon Prime) that appeals to us and creates such huge success stories? Here are a few reasons as to why I believe that these shows have been such huge successes thus far.

Let’s take something like House of Cards for example here; Kevin Spacey, Robin Wright, Kate Mara, Corey Stoll… need I say more? All fantastically talented actors in their own right, but those in particular like two-time 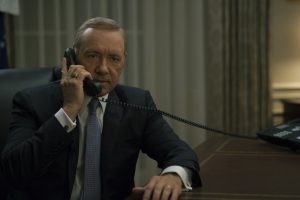 Kevin Spacey, star of House of Cards (image via IMDb).

Academy Award winner Kevin Spacey have a real bankable presence to them. If a casual Netflix viewer is looking for something new to binge on, and they come across a show starring Kevin Spacey, then they’re that much more likely to check it out. Name recognition can still go a long way: just look at how appealing the Marvel shows Daredevil and Jessica Jones have been to people, the attraction is all essentially on the Marvel brand. And if a viewer is looking for a new comedy show and they come across Transparent on Amazon Prime, starring Jeffrey Tambor, who they loved in Arrested Development, then they’re drawn much more to that than to watching Friends re-runs for the 50th time. 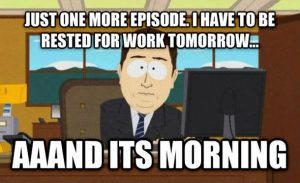 *checks the time*
“It’s only 10 pm, just one more episode”
*finishes the whole series and checks the time again*
“Well damn it’s 4 am”

And thus continues the endless cycle of binge watchers. The very nature of these shows practically encourages binge watching; there are no adverts to sit through, there’s no waiting a week for the next episode, and, most of the time, you’re locked into your own little bubble. We have such free access to these shows that many people find themselves plowing through half a dozen episodes in one sitting, at least!

The addictive nature of these shows is what fans really love – if you really love it, then why wouldn’t you want to watch a bunch of episodes in one go? Why stop? Satisfying your craving for more is easy when Netflix temps you with the “play next episode” button.

There really is something for everyone. With an abundance of genres and tastes covered, audiences can change from one show to another and experience something totally different with each show. Over the last year alone, I personally have binged through the aforementioned: Making a Murderer, Wet Hot American Summer: First Day of Camp and season one of Daredevil. I never felt like I had just seen something familiar, it was always a new experience.

But most importantly, nine times out of ten these shows are of a high quality. Just look at the Metacritic, Rotten Tomatoes and IMDb scores of many of these shows, and the number of award nominations and wins they receive, it is remarkable. We wouldn’t watch a show if we didn’t hear great things about it in the first place. Take something like Making a Murderer, for example. I watched the show through pure word of mouth reasons, I didn’t know anything about it going in, just that people had been transfixed by it. Rarely have people been this excited over a documentary show before. Truly I believe that it’s one of the best shows out there. But Making a Murderer isn’t alone; Daredevil, Transparent and House of Cards have all been terrifically well received by audiences and critics, proving once and for all that our love for the streaming service original shows is largely down to the fact that they are just so darn good.

Why not watch the trailer for Stranger Things below- not like you’ll end up addicted right?