Following the release of the first poster for Doctor Strange yesterday, we now have our first true glimpse at the Sorcerer Supreme and on this evidence, it is safe to say that the film appears to be sticking to the darker and twisted origin story of Stephen Strange, which first debuted in the comics in 1963.

Although it is only a teaser, quite a lot of information is revealed in the trailer. Initially, we get a shot of the potential fatal accident that cripples Benedict Cumberbatch’s titular surgeon, accompanied with some truly eerie background music and a haunting voiceover from Karl Mordo (Chiwetel Ejiofor) who warns him to ‘forget everything’ that he knows. A short montage of clips of Strange, both recovering and suffering, is paired with someone criticising him for spending his life ‘looking through a keyhole’ and subsequently ‘trying to widen it’. Like Sherlock’s case, emotional empathy and compassion aren’t exactly Strange’s greatest qualities, which potentially bodes well for Cumberbatch as in this role. 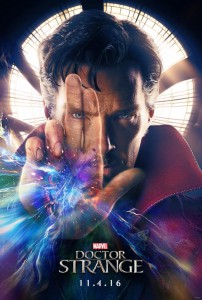 The latest poster. (Image via Marvel)

We are also told that the ‘reality is one of many’ by Tilda Swinton’s mystical teacher, The Ancient One, whose initial casting led to controversy amongst the Marvel fanbase due to the fact that the character was originally male. On this evidence however, there seems to be little relevance as she looks to step into the role well. After Strange obnoxiously reveals he doesn’t ‘believe in fairytales’, The Ancient One merely comments on his future being ‘possibility’, before a brilliant force-palm sequence which sends Strange’s soul of out his body – the CGI in which is very impressive. Although Strange questions why he’s doing this in a mind-bending, distorted sequence that shows him trying to master his powers, The Ancient One’s words of wisdom come to the fore once again, stating ‘there are other ways to save lives.’

As the teaser reaches it’s climax, we see Mordo manipulating Strange’s mind, much to the latter’s shock and evident confusion, before another impressive CGI sequence showing three realities distorting and bending into each other. This is all clearly enough to impress Stephen who ends the trailer begging The Ancient One to teach him. The return of the eerie music accompanies the logo, before the trailer ends with Strange ascending the iconic steps of the Sanctum Sanctorum.

If that wasn’t enough, director Scott Derrickson also revealed a second new poster for the film, which once again features the familiar Sanctum Sanctorum window background, but this time focuses on an oddly menacing close-up of the Master of the Mystic Arts channelling his powers. Doctor Strange should mark an evident change in the MCU as we move closer to Infinity War and if his solo film is successful, we may quickly see him become a new kingpin of the MCU. And the early evidence is very promising indeed.

Doctor Strange is set to hit UK cinemas on 28th October. Watch the teaser trailer below.