Read more
You are at:Home»News»Global News»Notes on News: Should films be available in homes on the day of cinema release?
By Hollie Geraghty on March 22, 2016 Global News, News

Directors James Cameron and Christopher Nolan have recently voiced their opposition to ‘Screening Room’ – a new company that wants to release films in US homes on the same day as they open in cinemas. Screening Room plans to charge $50 (£35) for 48 hours of home access to a newly released movie.

Both James Cameron and his co-producer on Avatar and Titanic, Jon Landau, have claimed that this idea threatens “the sanctity of the in-theatre experience”. Landau also stated that even though the Screening Room proposal is only in the early stages, that “we have an obligation to speak out publicly against it.” He continued; “From both a creative and financial standpoint, it is essential for movies to be offered exclusively in theatres for their initial release. We don’t understand why the industry would want to provide audiences an incentive to skip the best form to experience the art we work so hard to create.” The Dark Knight trilogy’s Christopher Nolan also stands in opposition of Screening Room, stating that “it would be hard to express the great importance of exclusive theatrical presentation to our industry more compellingly than Jon Landau and James Cameron.”

There is lots to be said for both sides of the debate, but ultimately the cinematic experience is one which must be preserved. Films such as Avatar could not have shown off it’s various creative strengths – such as the music, special effects and cinematography – had it not been revealed on the big screen during initial release. Cinema simply allows fans to have the full cinematic experience before making the choice to watch it again on a smaller screen –  in this way none of the creative elements are lost. Whether in 3D or not, Avatar would not have been such a successful film had it not been released in cinemas for initial release. Similarly, the sheer vastness of space in Christopher Nolan’s Interstellar would have been completely overlooked were it not enhanced on an IMAX cinema screen.

Furthermore, having watched Colin Trevorrow’s Jurassic World last year in IMAX and 3D, I can honestly say I have never had a better cinematic experience. The size and realism of the Indominus Rex in 3D, as well as its deafening roar, was genuinely frightening and so effective in enhancing the film. However, it is evident that not all films gain as much from being shown in a cinema as epic sci-fi or space films would. This could understandably be the reasoning of advocates of Screening Room, as low budget indie films whose themes and content takes precedent over style and special effects, would be unlikely to lose anything from debuting on a TV screen instead of a cinema one. 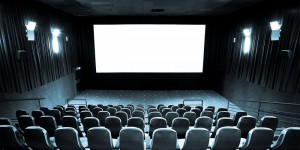 The debate has divided Hollywood and could pose a very real and serious problem for the fate of cinema. (Image via Google)

In addition it could be argued that the home cinema experience is considerably different than it was even 10 years ago. Surround sound, as well as flat screen, HD TVs have become far more affordable and therefore more accessible to the average family, therefore providing an enhanced home cinematic experience. Even 3D is no longer a novelty where audiences wear cardboard glasses with blue and red lenses. It is now an effective entertainment medium and a realistic purchase for families to enhance their own home cinema. In this way, it can be said that home cinema can create a similar experience to a theatre one, but this would definitely vary by film genre and style.

In addition, there is undoubtedly a positive aspect of Screening Room, as film fans who may have a disability or condition which prevents them from attending the cinema would now have the same opportunity to view a new film just as everyone else would. This would also allow them to join to social media conversations and share their views and enthusiasm on films that they might otherwise have not been able to see. This issue highlights that perhaps Screening Room should not become universally available to everyone, but should be considered in specific circumstances. In this way, it would be bringing cinema to people who otherwise might not be able to experience it, rather than making it available to people who could just as easily attend a cinema screening.

However, a major red flag in the Screening Room idea is that piracy would become ridiculously easy, and virtually unavoidable with new releases. Although early supporters of Screening Room include Peter Jackson, Martin Scorsese, Steven Spielberg and J.J. Abrams, opposition has come from the National Association of Theatre Owners and the Art House Convergence. The Art House Convergence – a group of roughly 600 speciality theatres – has spoken out, emphasising that Screening Room could inspire “a wildfire spread” of pirated content. Although the technology is intended to be anti-piracy proof, the Art House Convergence members still question how it prevents people from taping the films. The letter stated, “If studios are concerned enough with projectionists and patrons videotaping a film in theatres that they provide security with night-vision goggles for premieres and opening weekends, how do they reason that an at-home viewer won’t set up a $40 HD camera and capture a near- pristine version of the film for immediate upload to torrent sites.”

Producer Landau also expressed economic concerns, stating “To us, the in-theatre experience is the wellspring that drives our entire business, regardless of what other platforms we eventually play on…No one is against playing in the home, but there is a sequencing of events that leads to it.” The Art House Convergence also highlighted that a “loss of revenue through box office decline and piracy will result in a loss of jobs, both entry level and long term, from part-time concessions and ticket-takers, to full-time projectionists and programmers..and will negatively impact local establishments.” However, Screening Room’s business model intends to charge $50 for each new release, giving theatre owners as much as $20 of that fee. Screening Room also plans to charge $150 for access to a set-up box. Although the economic aspect of this issue is important, it is the cinema experience which is most valuable. As Landau aptly noted, there is nothing wrong with home screenings, but by making this available before a film has had its run in the cinema, the cinematic experience would truly become lost.

Cinema is quite possibly the most effective form of escapism available to people today. During the Great Depression, unemployment reached an all time high in 1933. With twenty-five percent of the country unemployed at the peak of the Depression and barely able to make ends meet, 60-70 million Americans still packed into theatres every week, simply to escape their economic hardship. For decades, people have gone to the cinema for a very brief escape from reality. If Screening Room’s plans go ahead, no home cinematic experience will ever be able to replace the original theatre one.