Christopher Nolan’s acclaimed second feature film, Memento, was released in the US 15 years ago today on 16th March 2001.

Raking in £90,642 on its opening weekend and going on to be nominated for the Oscars in Best Writing: Screenplay and Best Film Editing (Dody Dorn), Christopher Nolan’s Memento is a postmodern masterpiece; entangling viewers among themes of memory and identity. It is based upon a short story by Nolan’s brother, Jonathan Nolan, entitled Memento Mori, which refers to the Latin phrase “remember that you will die.”

Guy Pearce stars as Leonard, a man who is desperately trying to piece together the rape and murder of his late wife, becoming disturbingly obsessive as the narrative progresses. The narrative ploy that so elevates this film from a linear murder mystery is solely focused on Leonard’s memory, as he is depicted with a condition (tied to the event of his wife’s murder), which prevents him from retaining short term memories. To counteract this, Leonard deals with a series of polaroids that become motifs throughout Memento, and tattoos himself with important information such as the ‘facts’ he believes he has found with regards to his wife’s killer. He ultimately becomes a map of his own narrative, and lives between hotel rooms reliant on post-it notes to get him through the day. 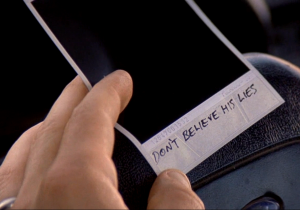 Polaroids are a running motif within the film. (Image via Youtube)

It’s no wonder that Memento was credited for its editing. The narrative is non-linear and its construction perfectly fits this. Seemingly linear sequences are permeated by black and white flashbacks that jar the narrative, with scenes often repeated to instil their content. It leaves you in a whirl of déja vu as you question whether or not you have seen what is before you before, which becomes increasingly unsettling as your reliance on the protagonist wavers. It puts you in a spin as you work alongside Leonard to solve the mystery of his wife’s murder, eventually trusting no one at all.

Memento makes you question the reliability of your own memories, and the question: “what would I be without my memories?” It forces identity to be intricately entwined with memory, causing the loss of memory to serve as the most unsettling ailment of all. It is beautifully unsettling to watch, with its neo-noir inflections (amped up by its wonderfully orchestral score) given an enticing twist through the construction and reflective narrative.

It was announced in 2015 that Memento is set to be remade by AMBI Pictures, run by Andrea Iervolino and Monika Bacardi. Bacardi has stated: “We intend to stay true to Christopher Nolan’s vision and deliver a memorable movie that is every bit as edgy, iconic and award-worthy as the original.”

Watch the trailer for the original film below.