57 Days. The wait for Captain America: Civil War will start to become unbearable soon. There is an expectation that one final trailer might be released sometime in the next two weeks to drive the hype towards its peak, but before that, we have to be satisfied with some behind the scenes images available online on Birth Movies Death’s website.

Devin Faraci, Editor in Chief of Birth Movies Death, has been lucky enough to speak to some people who have already seen the preview showings of the film. This tells us two things; 1) Marvel has a product – although not quite the finished article – which they are happy to label as Civil War and 2) We can now get a potentially unbiased opinion. Faraci says the film isn’t ‘Avengers 2.5’ but rather more of a ‘Captain America 3’ and cites the exploration of ‘Cap and Bucky’ as being the true driving force of the plot. 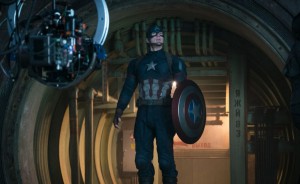 A new behind the scenes still of Cap. (Image via Marvel)

This is reassuring, as there was certainly a potential for this integral and complex relationship to be shoe-horned into a film more focused towards throwing superheroes around left right and centre for the purpose of profiteering. Another more interesting viewpoint on the film is that it is an ‘emotional horror story’ that allows us to ‘feel the true costs of Sokovia’ which was almost destroyed in Age of Ultron. Because of the relatively short amount of time at the end of film after Ultron was defeated, we never really got to see the true effects and aftermath of such a terrifying event, which most crucially was caused by Tony Stark himself.

It is a bold and brave step for Marvel, in my opinion, to deal with the consequences of an event like this and I for one hope that they give it the gravitas and justice it deserves. Black Panther has also been described as ‘phenomenal.’ This is awesome because as a Marvel fan, I love the character and Chadwick Boseman, ‘a major addition to the MCU’ is a great casting choice. We are going to be seeing a lot more of him, and it seems he has started very well indeed.