Following last month’s announcement that Robot Wars will be returning to BBC Two later this year, a lot of speculation and anticipation has arisen over who would be presenting the reboot of the classic ‘smash-em-up’ cult tech show, and now we finally have an answer.

Mock the Week and former The Apprentice: You’re Fired host, Dara O’Briain will present the updated series alongside Angela Scanlon. Although neither are Craig Charles – who is most fondly remembered by fans for his iconic work presenting the original 1990’s series – these two look like a decent fit to the show and frankly seem very excited about it. 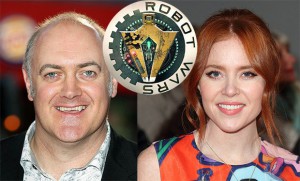 Above: The new presenting team.

For O’Briain, the joy appears particularly evident, as he discussed how “thrilled” he was to be running the show. “For too long, the schedules have cried out for a show in which dedicated amateurs toiling day and night, handcraft sophisticated automatons built on the delicate interplay of hand-wired servo motors with custom-built circuit boards and fingertip motion control, just to see them get smashed to pieces by a dustbin carrying a massive hammer,” he said. “It’s war, and how I love it so.”

Scanlon seemed equally keen on her involvement, admitting “I cannot wait to see the robots in all their metallic glory playfully destroying each other!”

Despite the lack of Craig Charles, the reboot is still keeping the series’ original (and irreplaceable) commentator Jonathan Pearce, who expressed how “delighted [he was]to be involved and back among the cut and thrust of the robot battles.” Though the new series will be using a purpose-built arena in Glasgow for the battles, the new logo pays homage to its predecessor by basically reworking the classic symbol.

Watch the return of the dreaded House Robots, led by the iconic Sir Kill-a-lot, in the teaser below.

And… this is what you’ve been waiting for. A sneak peek of #RobotWars. Excited yet?https://t.co/NptKzynFET