Read more
You are at:Home»News»Global News»Bestival announce first acts for 2016 line-up, including The Cure and Major Lazer
By Anneka Honeyball on January 29, 2016 Global News, News

After revealing it’s future theme, Bestival have now revealed the first acts for their 2016 line-up.

The first three headliners include The Cure, Major Lazer and Hot Chip. The headliner for Sunday has yet to be revealed. 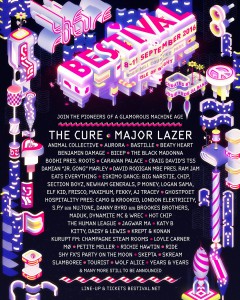 Above: The full line-up, so far… (Image via Bestival)

Speaking of their headline Saturday set, The Cure’s Robert Smith said: “We are very very happy to be back at our favourite festival; we can’t wait to play a special set to show the future IS what it used to be…”

Meanwhile, Major Lazer commented: “We started at Bestival five years ago, and it was one of our favourite shows to date. Feels like home for us… Rugged and real music fans… Since then we finally impacted in England, and we can’t wait to do our new show and play all the records for the fans at one of the best festivals in the world!!”

Other acts that have been announced to be playing at this year’s festival include Wolf Alice, Bastille, Craig David, The Human League, Years & Years, Skepta, MØ, Katy B, Animal Collective and Petite Meller.

Speaking of this year’s event, festival curator Rob Da Bank said: “So, here we go again, but this time we’re going far… far away… into the future. Prepare yourselves for a Bestival unlike any other with futuristic new stages, and as ever it’s a broad church of music from every decade and every genre. […] This is just the start of the trip – see you in The Future!”

Bestival will take place on Robin Hill in the Isle of Wight, from 8th-11th September 2016. For more information and ticket details, visit their website.