Read more
You are at:Home»News»Global News»Notes on News: Where are the Oscar Nominations for minority figures?
By Carly-May Kavanagh on January 25, 2016 Global News, News

The hashtag #OscarsSoWhite has been revived following the overwhelmingly Caucasian outcome of the Oscar nominations earlier this month. The hashtag first emerged last year, when it was noted that all the nominees in the major acting categories were white. Unfortunately that Academy trend has returned for a consecutive year; Yet again, in the categories of ‘Best Actor’, ‘Best Actress’, ‘Best Supporting Actor’ and ‘Best Supporting Actress’, only white people have been nominated.

And it isn’t as if there weren’t any non-white actors deserving of such an accolade. Michael B. Jordan (Creed), Will Smith (Concussion) and Idris Elba (Beasts of No Nation) were among some of the most notable black actors that didn’t receive Academy recognition, as were the black cast and director of hip hop biopic, Straight Outta Compton. The film was nominated for ‘Best Screenplay (Original)’ granted, but the recipients of the nomination are still overwhelmingly white.

It could be argued that it really is no surprise that the 20 nominated actors are white. The Academy has always been seen as an institution lagging behind the times. However, many prominent black Americans in the film industry have made a stand against the lack of diversity at the Oscars, by declaring that they will boycott the ceremony. Jada Pinkett Smith and Spike Lee were among the first to make such a stand, while the likes of George Clooney and Lupita Nyong’o have also spoken about the lack of diversity in nominees. 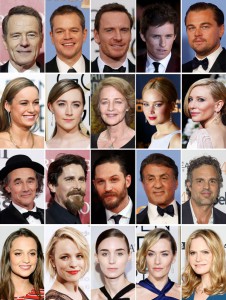 For the second year in a row, the acting categories are occupied by white actors.

As it is, nominations are often based either on guilt tripping, or backdoor funding. For example, 12 Years A Slave received nine nominations in 2014, winning three in the categories for Best Supporting Actress, Best Adapted Screenplay and Best Picture. Startlingly, the film’s director, Steve McQueen became the first ever black man to win an Oscar for his role in the production. But even after such a ground-breaking win, it was later alleged that several of the Academy voters had never even seen the film, only nominating it for its harrowing subject matter.

Currently, the Academy’s 6,000-odd voting members are 94% Caucasian and 77% male, so it is difficult to get diverse cultural sampling from a group that is not by any means culturally diverse. However that doesn’t mean that the systematic bias doesn’t need to be addressed – as Smith pointed out, children will watch the awards and not see themselves represented. The lack of diversity in nominations also means that talented people of colour are not rewarded for their talents.

The cast of Straight Outta Compton has received no acting nominations, but compared to The Revenant – which is leading this year’s race with 12 nominations – it seems more than a little unjust. By 10th January 2016, The Revenant had made $39.5 million. Straight Outta Compton smashed its initial $40-50 million projections in its first weekend with a $60.2 million opening. So why is it that a film that made almost double the amount of money has only one production nomination, compared to The Revenant with its 12? It is possible for the ‘whiteout’ to be a statistical glitch –  a 2013 survey of the Screen Actors Guild suggests 70% of its members are white. However despite this, the chances of no people of colour being nominated over two years is exceptionally small.

The reasons behind who is popular and who isn’t is controlled for a variety of reasons – as in 12 Years A Slave, one reason why they could have received so many nominations is to promote guilt over a situation that was started by white people. It’s similar to the ‘Where’s Rey?’ debate, wherein Rey from Star Wars: The Force Awakens was left out of game sets, or Black Widow from Avengers Assemble similarly. Or with Fifty Shades of Grey, a movie that essentially depicts an emotionally and psychologically abusive relationship (leading to outcry from BDSM communities), which was glorified and made popular by Hollywood.

Hollywood wants to decide what is popular and what is nominated, and have a huge amount of power. If consumers of media want films to be reflective of their societies, like they do in parliament and executive scenarios, then these areas need improving. Cheryl Boone Isaacs, President of the Academy said “the Academy is going to lead and not wait for the industry to catch up.”An emergency meeting was held and the Academy are now planning to change the voting process in order to double the number of women and ethnic minorities by 2020. One change includes the voting status of members being reviewed every 10 years, with those who haven’t been active in film possibly having their membership revoked.

People of colour buy 40% of America’s cinema tickets and considering that they, along with the people tweeting #OscarsSoWhite, no longer want a whitewashed Hollywood, it’s no wonder that things are starting to change. Just how quickly that change can be implemented however, has yet to be discovered.