Read more
You are at:Home»News»Global News»Ross Kemp is returning to EastEnders
By James Barker on January 18, 2016 Global News, News

Ross Kemp has announced that he will be reprising his iconic role as Grant Mitchell for a guest stint in EastEnders this spring, following news of Dame Barbara Windsor’s final exit from the show as Grant’s mum Peggy.

“When I was approached about returning to EastEnders for Barbara’s final episodes, it was something I could not turn down,” said Ross Kemp in a statement. “Barbara is a very close friend so when I learned of the storyline, it felt right that the Mitchell brothers are reunited with their mother for the last time.” 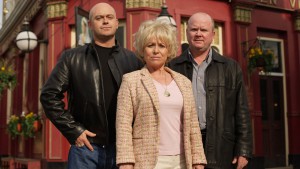 Kemp is returning for Barbara Windsor’s exit from the show

Grant is one half of the Mitchell brothers, alongside Phil, played by Steve McFadden. The brothers made their debut on the soap in 1990, and though Kemp left in 1999, McFadden has remained in EastEnders to this day.

Ross Kemp’s return marks the first time that the Mitchell family have appeared in their entirety since 2006, when Grant made a guest return. Barbara Windsor originally left the show as Peggy in 2010, but after making several guest appearances over the last five years, she decided it was time to leave for good. On Saturday, it was announced that Peggy would be killed off.

Fans are also hopeful that Daniela Westbrook may return as the Mitchell sister, Sam. Westbrook is currently in the Celebrity Big Brother house.

Grant’s return is due to air sometime in the Spring. Since leaving EastEnders, Kemp has made a name for himself by making documentaries, such as Ross Kemp on Gangs.