Read more
You are at:Home»News»Global News»Notes on News: The “fucking boys’ club” that is the music industry
By Amy Wootten on December 22, 2015 Global News, News

For any female artist, the first thing they get asked (aside from, perhaps, what they are wearing, why they are wearing it and why they have or don’t have their skin on show) is: “what is it like to be a woman in the music industry?” Is there ever a need to ask a male what it’s like for them in the industry? No, because even now, we are all fully aware that – as Lady Gaga succinctly put it – “it’s a fucking boys club that we just can’t get into.”

After winning Woman of the Year at this year’s Billboard’s Women in Music Awards, Lady Gaga spoke directly about the gender bias within the music industry. For female artists, Gaga recognised that they are more likely to be noticed for their bodies and appearance than for their music, or even won’t be taken seriously for their music because there is such a focus on body image. We’ve seen this everywhere, women (and this is by no means restricted to the music industry) are scrutinised for every element of their appearance, often with little attention to their musical ability. But why such a focus on appearance? It’s as if a woman cannot simply be great at what she does, her talent cannot merely be accepted: the industry must focus on flaws in her appearance to undermine that talent- which simply isn’t something male artists have to deal with.

Twenty-three year old Charli XCX recently made a documentary, Charli XCX: The F-Word and Me, in which she explicitly explored, from an insider’s point of view, what it is like to be a woman in the music industry. Like Gaga, she exposed that it is a man’s world- and she wasn’t alone in thinking this. Among those interviewed, many expressed that the people at the top are nearly all male, and older males that don’t get what young female artists want to do at that. Lizzy Paplinger, one half of electronic duo MSMR, is a woman in a high position in the music industry, and she spoke out about women reaching a certain level, and then not being able to get any higher. So the bias in the industry isn’t just restricted to artists, it prevails throughout the entirety of it. This is backed by statistics, too. According to a report by Creative & Cultural Skills, the gender divide across jobs in the music industry falls at 67.8% to males, and just 32.2% for females. 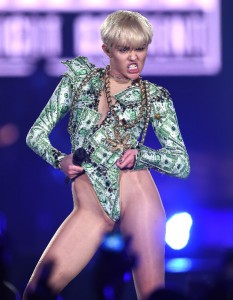 Miley Cyrus is one of the most prolific female artists currently challenging the status quo.

Essentially, the way that artists are fighting back with this is by breaking the rules, doing what they want, and defying what is expected of them. Music videos have come to be a site of this expression, a way for female artists to take control over their identity and the image of themselves that they put across. Defying the male gaze, and constructing their bodies as a site of agency, by taking control of their bodies, it feels as though women are fighting back in the war of gender bias.

Dazed noted the videos that changed the male gaze, and all of them are by women. Miley Cyrus as a baby in ‘BB Talk’ defies the sexualisation of the naked female body; Missy Elliot places women of colour at the foreground of her video for ‘WTF (Where They From)’, using dance as an expression of control and agency, whilst Rihanna becomes a Tarantino-like killer in the ‘Bitch Better Have My Money’ video that caused such a stir. With such agency and control presented through music videos, they still fall under scrutiny. I will use Miley Cyrus as a quick case study. Every other day, there’s an article about Miley doing this, or Miley wearing that; an example being her recent appearance on stage with a dildo and fake breasts. Okay, it’s different. Maybe a bit shocking. But the stir it causes stems simply from the fact that she is not conforming to the virtuous representation that is still expected of women, and no one likes it when women take control and do things they “aren’t supposed” to do.

Women fight back through their own social media accounts, too, with Grimes (who produces all of her own music) posting on her Tumblr; “I’m tired of men who aren’t professional or even accomplished musicians continually offering to ‘help [her]out'” as if she were incompetent and needed the hand of a man.

To return to Lady Gaga, she noted in her speech that “women provide a wisdom to music that is very unique and special […] because we bear life, and go through things that no one else goes through.” In amongst the hostility of gender bias, there appears to be something great emerging – a sense of support among female artists to stand in unison against the oppressive nature of society, and the music industry. If every cloud has a silver lining, the emergence of this is a wonderful thing. But things still need to change.

Equality is something we strive for in every walk of life, and until the industry comes to treat female artists on the same level as male ones, the question of “what is it like to be a woman in the music industry” will remain important, if only to expose what women have to go through in the industry that men don’t. One day, though, we’ll just ask “what’s it like being an artist in the music industry?”. Until then, women will have to fight back in the ways that they have been: taking control of themselves and their bodies through their music. There isn’t much that is more empowering than that.