The definitive 90s classic was released on December 15 1995 and put Hollywood legends, Al Pacino and Robert De Niro head to head, as a veteran detective and a professional thief warring against each other.

Written, produced and directed by Michael Mann, Heat tells the story of a group of professional bank robbers headed by Neil McCauley (De Niro) who begin to feel the heat from the L.A.P.D. after unknowingly leaving a clue at their latest heist. Veteran L.A.P.D. robbery-homicide detective, Lt. Vincent Hanna (Pacino), is tasked with tracking down McCauley’s crew. 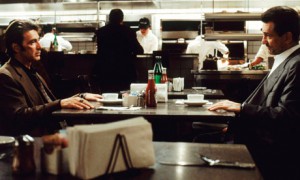 Above: The infamous coffee scene.

The film is based on one of screenwriter Chuck Adamson’s more famous police cases in Chicago in the 1960s. Neil McCauley was a real criminal – an ex-Alcatraz inmate who Adamson (a then-cop) tracked down in 1964. McCauley and his crew were responsible for a number of heists, one of which is closely recreated in the film alongside a number of other scenes such as the iconic moment in which Pacino and De Niro’s characters meet for coffee.

As with a lot of films of the decade, Heat became somewhat controversial, due to certain scenes being cited as the inspiration for a spate of robberies after its release. Most famously, the 1997 North Hollywood shootout – in which two perpetrators robbed the North Hollywood branch of the Bank of America and were confronted by the LAPD as they exited the bank. It is known for being one of the bloodiest police shootouts in American police history, with eleven police officers and seven civilians being injured, along with both the robbers being killed.

The combination of De Niro and Pacino’s performances, the atmospheric soundtrack and Mann’s refusal to work on a soundstage (the film was shot solely on location) makes for an unforgettable cinematic masterpiece that still captivates audiences twenty years later.

Take a look at one of the film’s most memorable scenes below.