Read more
You are at:Home»News»Global News»Fantastic Beasts and Where To Find Them receives first teaser trailer – watch
By George Seabrook on December 15, 2015 Global News, News

The first teaser trailer for Fantastic Beasts And Where To Find Them has finally landed. 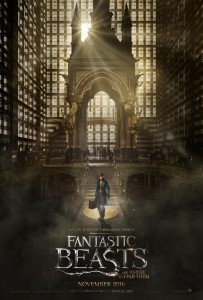 The film will follow the adventures of magic zoologist Newt Scamander (played by Eddie Redmayne), as he finds himself in New York City in the 1920’s with a magical briefcase full of creatures he’s met on his travels.

Not much is known about the story – we are after all 11 months away from the film’s release – but as the trailer reveals, that briefcase won’t stay shut for long…

The film is not expected to tie into the Harry Potter series too strongly, given that most of those characters had not yet been born in the 1920’s. Yet with a script written by J.K. Rowling (all-round wonderful human being), returning series director David Yates (who was in charge of some of the best Harry Potter films), and a cast that includes Inherent Vice‘s Katherine Waterston, Ezra Miller, Colin Farrell, and Ron Perlman, it’s an exciting prospect nonetheless.

Fantastic Beasts and Where To Find Them is released in the UK on 18th November. Watch the teaser below.