Directed by Tim Burton, this movie was the first milestone in the ongoing collaborations between Burton and actor Johnny Depp, as well as the director’s fourth collaboration with composer, Danny Elfman. The movie is in fact adapted from Burton’s own story and reflects all the gothic atmosphere that so specifically characterises Burton’s work.

The weird ambience within the movie is undoubtedly the cause of its resonating success in popular culture. The films’ gothic, artistic world combined with the typical American middle-class suburban lifestyle reflected the importance of conformism in a pretentiously open-minded and welcoming micro-society. 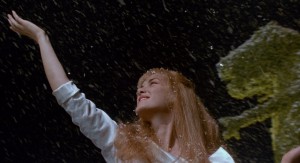 As well as carrying themes of consumerism and conformity, the film also focused on the fragile romance between Edward and Kim.

Some think of the story as a modern Frankenstein fairytale, and indeed Edward is pure-hearted person, whose razor-handed fate is condemned with the death of his creator, leaving the poor hero unfinished with strange hands, unfinished. But in contrast with traditional fairytales, the ending of this film is far more tragic and bittersweet.

Edward, being a kind and gracious figure with the best intentions, is soon confronted with the hypocrisy of people who want to take advantage of him. As the people from the suburb find themselves confronted with Edward’s flaws and differences, they reject him, leaving him to live a life of solitude – despite his finding happiness with the Boggs family.

One of the most well-known and beloved moments in the film is perhaps the scene in which Kim (Winona Ryder) dances around an ice sculpture that Edward is crafting with his creative shears. This moment is especially poignant, as it reveals the innocent beauty of Edward’s imagination, which is mesmerising to both Kim and us, as viewers.

Upon release, the movie (which also starred Dianne Wiest, Alan Arkin and Anthony Michael Hall) was declared a commerical success, earning a total of $86.02 million at the worldwide box office. The film also received critical acclaim, due in part to the heart-melting chemistry between Depp and Ryder.

Burton once remarked that Edward Scissorhands was the most personal movie he has made and indeed, the film is a cornerstone in the legacy of Tim Burton’s universe, telling a story which still melts our heart after 25 years.