The meaning behind the mysterious countdown on Foo Fighters’ website has finally been revealed, with the surprise release of a 5-track EP entitled St. Cecilia.

The EP’s name – and title of it’s first track – refers to the hotel in which the band wrote and recorded the EP in Austin, Texas. All songs were created spontaneously, apart from one song, ‘The Neverending Sigh’, which has been in the making for 16 years. The track was originally titled ‘7 Corners’ and was meant to be released on the Foo’s third record, There is Nothing Left To Lose. 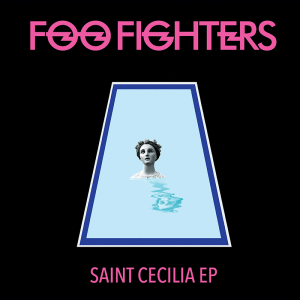 The new EP is available to download and stream for free.

The full tracklist reads as follows:

Attached to the EP, Grohl has written an open letter (which you can read in full here) to Foo Fighters fans on how the EP came to be, and how it has taken on an entirely new meaning in the wake of the Paris terror attacks that took place earlier this month. On the band’s newly titled website, they also ask of you to donate aid to victims through Josh Homme’s music charity, The Sweet Stuff Foundation.

Grohl prefaces the letter with a short statement on the new meaning that the EP holds:

“Tonight, Let me begin with a preface to a letter I wrote a few weeks ago from my hotel room in Berlin while on our final tour for this album. I felt the need to write this foreword in light of the heartbreaking tragedies of Nov. 13th, as this project has now taken on an entirely different tone. As has everything, it seems… The Saint Cecilia EP was put into motion back in October of this year as a celebration of life and music. The concept being that, as our world tour drew to a close this week, we wanted to share our love of both with you in return for everything you have given us.

Now, there is a new, hopeful intention that, even in the smallest way, perhaps these songs can bring a little light into this sometimes dark world. To remind us that music is life, and that hope and healing go hand in hand with song. That much can never be taken away. To all who were affected by the atrocities in Paris, loved ones and friends, our hearts go out to you and your families. We will return and celebrate life and love with you once again someday with our music. As it should be done.”

You can listen to the new EP by either downloading or streaming for free, on iTunes, Apple Music, Spotify, or through the band’s website where you can also pre-order the EP on vinyl.

Listen to the track ‘Iron Rooster’ below.