Read more
You are at:Home»News»Global News»Nostalgic News: Beauty and the Beast was released 24 years ago today
By Georgia Simpson on November 22, 2015 Global News, News

24 years ago today, the world was first introduced to a “tale as old as time”, when Disney’s animated musical, Beauty and the Beast was released on 22nd November 1991.

Following the phenomenal success of The Little Mermaid (1989) – which was adapted from Hans Christian Anderson’s Danish fairytale of the same name – the Disney animation team decided to bring Jeanne-Marie Leprince de Beaumont’s french fairytale, La Belle et La Bete, to life. It was the 30th film in the Walt Disney Animated Classic pantheon and was directed by Gary Trousdale and Kirk Wise. 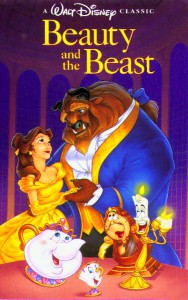 Belle voiced by Paige O’Hara in her iconic gold ballgown on the VHS cover. (Image via Disney)

The fairytale tells the story of the unlikely relationship between the Beast – a prince who was magically transformed into a hideous monster by a witch as a hellish punishment for his ignorance – and the kind and intelligent Belle, whom the Beast imprisons in his castle. To become a handsome prince once more, the Beast must find true love before the last petal on his enchanted rose falls . He is encouraged by his castle staff – who are also cursed to remain in the form of utensils and furniture until the spell is broken – to win Belle’s love.

The film has also had success as a Broadway musical, when it became the first Disney film to hit the stage in April 1994 – thus inspiring subsequent Disney musicals such as The Lion King, The Little Mermaid, Tarzan and most recently Aladdin. The film has also had two direct-to-video sequels; Beauty and the Beast: The Enchanted Christmas (1997) and Beauty and the Beast: Belle’s Magical World (1998).

Beauty and the Beast remains relevant 24 years on, because of it’s likeable and memorable characters such as Lumière and Mrs Potts, as well as the iconic show tunes  ‘Be Our Guest’ and ‘Belle’. It is also set to be remade into a live-action remake, starring Harry Potter’s Emma Watson as Belle and Downton Abbey’s Dan Stevens as the Beast.

Remind yourself of the ‘most beautiful love story ever told’ in the trailer below.