Read more
You are at:Home»News»Global News»Queen and Adam Lambert will headline Isle of Wight Festival 2016
By Anneka Honeyball on November 12, 2015 Global News, News

It has been announced that Queen and Adam Lambert will be the headliners of next year’s Isle of Wight Festival.

Alongside Lambert, the iconic group’s remaining members, Brian May and Roger Taylor will be making their UK festival debut at the event, which is set to take place from 9th-12th June 2016. 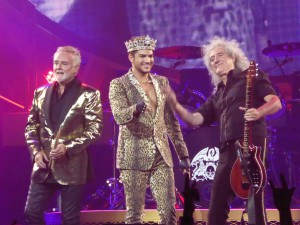 Lambert has been performing with the group, in place of the iconic Freddie Mercury, since 2011. (Image via Google)

Speaking of their headline slot, May said: “I think Queen at The Isle of Wight Festival is a date that was long overdue. How incredible to take on this challenge at this point in our lives. With an injection of new blood in the shape of the incredible Adam Lambert, Queen will be ready to tear it up on this legendary stage in 2016. Freddie would have loved it. Can’t wait.”

Taylor continued: “When I think of The Isle of Wight Festival I think of Hendrix, Dylan and The Who. What immortal company to be in.” Meanwhile, Lambert – who has performed with the group since 2011 – also expressed his excitement, stating that he was “thrilled to help continue [the band’s]legacy into 2016.”

The festival’s chief organiser, John Giddings also added: ““It’s an honour for us to have Queen and Adam Lambert at our festival. It’s the perfect way for us to celebrate our 15th anniversary. Queen’s music appeals to people of all generations and it’s hard to think of another band with such a famous collection of songs. It’s going to be an incredible moment for The Isle of Wight Festival when they share these songs with us.”

Queen and Adam Lambert will be taking to the stage on Sunday 12th June 2016. For ticket details and more information, visit the IOW Festival website.

For a taste of what’s to come on our very own doorstep, watch the video below.