According to trade body UK Music, the overall market grew by 5%, outpacing the British economy, which grew by 2.6% in the same period. The increase can be traced to revenues by musicians, composers and lyricists, which rose 11% to £1.9bn and live music sales, which jumped 17% to £924m. 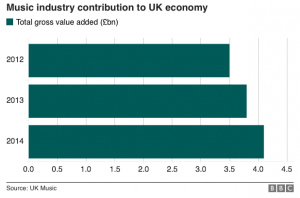 British artists accounted for one in seven albums sold around the world in 2014, with the likes of One Direction, Ed Sheeran, Coldplay, Pink Floyd and Sam Smith all making the top 10 list of the year’s best-selling albums. This means that Britain is now the second-largest provider of recorded music in the world, accounting for 13.7% of global sales.

But not all of the news was good: Revenues from recorded music fell by £3m last year, to £615m, UK Music have reported. Chairman Andy Heath put the blame on download stores and streaming music providers which, he claimed, put a stranglehold on revenues through an “unacceptable balance of negotiating power.” If that could be “diluted”, he added, “the current growth… could improve exponentially.”

The organisation’s annual Measuring Music survey also revealed that 35% of UK musicians are not paying into pension schemes, and that 21% had worked for free in the last 12 months, with the aim of furthering their career.

In total, 117,000 people are employed by the British music industry, 69,300 of which are professional musicians. Responding to the report, culture secretary John Whittingdale said: “Our artists continue to dominate the global charts – and shows from the Royal Ballet and Rod Stewart to the LSO and Status Quo, sell out concerts across the globe. In fact, many people around the world first learn about this country through one of our bands.”

He said he would use the statistics to inform a round table meeting with representatives from the music industry “to discuss how we can ensure that British music remains at the top of the charts.”