2015 has been an extremely busy year for Foo Fighters, and it seems like there’s no stopping them just yet. 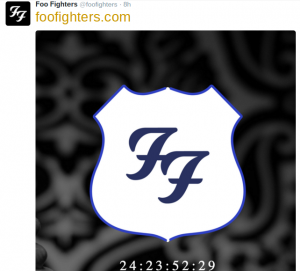 The band posted the mysterious countdown on their new website.

The band have launched a new website containing nothing but a clock, which is counting down to an as-yet unexplained event. The site also displays a crest with the bands logo inside, accompanied by background noise of what seems to be the band practicing.

The countdown ends on 23rd November – leading to speculation from fans that a sequel to the band’s successful 2014 project, Sonic Highways might be closer than anticipated. Earlier this year, Grohl confirmed that there would be a second series of Sonic Highways, so this just might be the announcement fans have been waiting for.

The documentary series, which accompanied Foo Fighters’ 2014 album Sonic Highways, won two Emmy Awards earlier this year, and the band are still touring the album on their renamed ‘Break a Leg Tour’, after Grohl broke his leg earlier this year in Sweden.

Remind yourselves of a track from Sonic Highways below.