Read more
You are at:Home»News»Global News»Andy Parsons bows out of Mock The Week
By Robert Pratley on October 21, 2015 Global News, News

The original panellists for Mock The Week appear to be becoming somewhat of a dying breed of late and Andy Parsons is the latest name to add himself to such extinction, having announced his departure from the show on Monday (19th October).

Parsons will be moving his focus to his new podcast and monthly panel show Slacktivist Action Group. The comedian appears very excited about this new project, which focuses on the bigger issues that the UK is facing economically, politically and socially and how to tackle them. 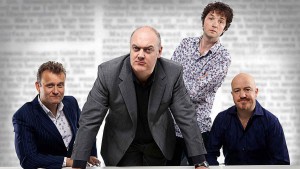 Parsons has been a mainstay of the programme since it began in 2005.

“With what seems like an exciting time for politics in this country, this is something I would like to focus more of my time upon, with a chance to host a show and set my own agenda,” Parsons stated, suggesting that perhaps he feels ready to take up the mantle of chairing a panel, rather than sitting on it, as he has done for so long.

Parsons has had a stunning 10 year run with Mock The Week, which has seen him feature in over 135 episodes of the popular BBC satire panel show, hosted by Dara O’Brien. Parsons has thanked all members of the BBC production staff and team that have helped him over the ten years, although perhaps in a sly dig at the apparent repetitiveness of the programme, he added: “When ‘Unlikely Things to Hear in a Superhero Movie’ comes around for the fourth time, it is probably time to move on.”

Equally, however, Parsons was optimistic about the future for Mock The Week suggesting: “Perhaps this will be an opportunity to make a female comedian a regular.” And with the plethora of talent out there, it is certainly possible.

Whether Parsons succeeds in running his new show remains to be seen, but undoubtedly he has been an excellent element of one of the best satire panel shows running and his absence may be felt for quite a while before his seat is filled.

For a reminder of his best bits, watch the video below.