Read more
You are at:Home»News»Global News»BBC commissions a third series of Inside No. 9
By Anneka Honeyball on October 20, 2015 Global News, News

Dark comedy fans, rejoice! It has been confirmed that the BBC have commissioned a third series of Inside No. 9.

The dark comedy anthology series, which was created by The League of Gentlemen‘s Steve Pemberton and Reece Shearsmith, will return for another six episodes at some point next year. 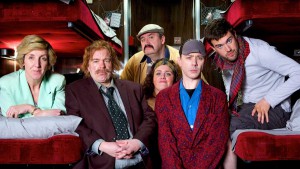 The series has attracted a number of stars throughout its two-year run. (Image via BBC)

Though the BBC have yet to officially announce the new series, the news was confirmed today (Tuesday 20th October), after Shearsmith took to Twitter to clear up rumours surrounding the series’ future.

In a post, the actor/writer said: “This is rumour control – here are the facts. We are indeed making a third series of Inside No. 9. Steve and I have written the new series.”

The first series aired to critical acclaim in 2014, while the second series was broadcast earlier this year. Each instalment of the show takes place in a different ‘No.9’, with previous locations including a haunted mansion, an all-night train cabin and an 18th century barn.

As well as writing these darkly comic tales, Shearsmith and Pemberton also appear in most episodes. The series also attracts a host of well-known names, with the likes of Jack Whitehall, Sheridan Smith and Helen McRory featuring in past episodes.

The third series of Inside No. 9 is expected to air on BBC Two at some point next year. Watch a clip from the last series below.