Time Out published an article in September which promoted the film by showing some of the film’s stars (namely Meryl Streep, Carey Mulligan, Romola Garai and Anne-Marie Duff) wearing promotional t-shirts in interviews that reflected their personal views on feminism.

The shirts depict a famous quote by prominent suffragette, Emmeline Pankhurst who said: “I’d rather be a rebel than a slave.” The quote comes from a speech that Mrs Pankhurst gave in 1913 as a rally cry for the women’s rights cause demanding women be given the right to vote. 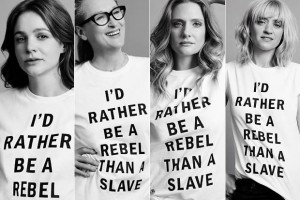 The T-Shirts worn by the film’s stars in this Time Out photoshoot have upset certain circles online.

This film promotion and tribute to the suffragette movement has evoked an enraged public response on Twitter and other social media, claiming that the advert is racially insensitive and takes a white supremacist tone when referencing slavery. Varied responses have also been exclaiming that the quote has been purposefully taken out of context to imply that slavery is a choice and establishes no difference between an ethnic majority and minority being enslaved. Time Out have stated that the intentions of the photoshoot and article were genuine and clear and that their millions of readers offered no complaints when the article was published.

Physical protests have also incurred at the film’s premiere at the London Film Festival, as groups gathered in a human barrier yelling “dead women can’t vote” into the crowd.  Last night (Wednesday 7th October), smoke bombs and flares were deployed by members of the Sisters Uncut protest group in Leicester Square in a demonstration calling for improved support for the victims of domestic violence.

Despite the backlash to the promotional stunt, the film has still received positive reviews with comments generally praising the emotional yet heart-warming portrayal of the lives of the activists.

Whilst this will likely remain a controversial photoshoot in the public eye it has emphasised the importance of this historical activist movement and has driven a debate which has raised awareness and causes the public to reflect on the sacrifices made for our society today.

Watch the trailer for Suffragette below.