Read more
You are at:Home»News»Global News»First image from Bridget Jones’s Baby has been revealed
By Anneka Honeyball on October 3, 2015 Global News, News

Working Titles have released the first image from the latest film in the Bridget Jones franchise. 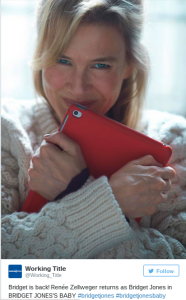 In the newly released image, we can see Zellweger peeking coyly from behind an iPad – suggesting that Bridget has ditched scribbling for touch-typing when it comes to sharing her inner most thoughts and feelings about life, love and her never-ending struggle with the bathroom scales.

The long-awaited second sequel began filming earlier this year, with Grey’s Anatomy star Patrick Dempsey joining the cast as a mystery hunk who will no doubt catch Bridget’s eye. Colin Firth – who portrayed Bridget’s long-suffering partner, Mark Darcy in the first two films – will also be appearing in this film.

The film has been adapted from some of Fielding’s past columns, rather than her 2013 novel Mad About The Boy, which controversially killed off one of the main characters.

David Nicholls (Starter For Ten, One Day) and Emma Thompson aided Fielding in writing the screenplay, while Sharon Maguire has returned to direct.

Bridget Jones’s Baby is expected to hit UK cinemas on 16th September 2016. Watch the trailer for the last film, The Edge of Reason, below.