Robert Pattinson has finally addressed the ongoing racism his fiancée FKA Twigs receives due to their relationship and his post-Twilight fame in the new issue of NME magazine. 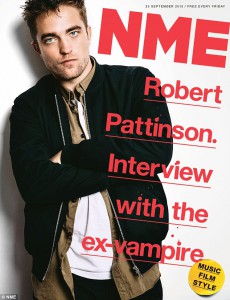 NME is now distributed for free on Highfield Campus every Friday. (Image via NME)

Pattinson spoke to NME in a featured article to promote his new James Dean biopic, Life, in which he plays famed photographer Dennis Stock, the artist who helped Dean (Dane DeHaan) reach unparalleled fame through a photo essay in Life magazine.

In the article, Pattinson called the racist commenters that target his fiancée – whose real name is Tahliah Debrett Barnett – “demons.”

“I was talking to my dad about this and I bet him that if he looked up Nelson Mandela’s funeral on YouTube, the first comment would be a racist one. And it was, with like a million upvotes. What I don’t get is why. I think it’s because most normal people are not commenters — I’ve never met anyone who’s left a comment on anything. It’s just demons who live in basements. You have this weird thing where you end up trying to fight against this faceless blob, where the more you hate it, the bigger it gets, because it’s all in your head.”

Not one to speculate or call attention to his relationship, Pattinson rounded off the interview by calling the hip-hop singer “just an amazing, amazing artist.”

You can collect a copy of NME from campus every Friday or read the article on Pattinson in full here.

Watch the trailer for Pattinson’s upcoming film, Life, below.