BBC One have unveiled their spectacular star-studded Autumn/Winter showreel for 2015, which teases the very best of what the channel has to offer in the coming months.

Chief among the clips within the three-minute montage is the Beeb’s stylish adaptation of John Le Carré’s The Night Manager. Starring the likes of Tom Hiddleston, Olivia Colman and Hugh Laurie, the one-off drama follows an ex-British soldier as he goes undercover and attempts to win the trust of a ruthless arms dealer. 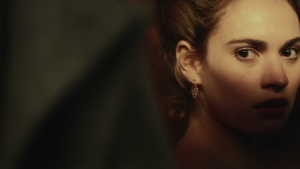 Lily James stars in War and Peace. (Image via Youtube)

Other dramas set to debut on the channel later this year include: War and Peace – the lavish retelling of Leo Tolstoy’s epic tale, starring Lily James; And Then There Were None – a three-part whodunnit based on an Agatha Christie mystery, featuring Charles Dance and Aidan Turner; From Darkness – a psychological thriller following a defeated policewoman played by Anne Marie-Duff; and River – a six-part crime series starring Stellan Skarsgård.

Stephen Rea can also be seen leading a huge ensemble cast for the 20-part period series, Dickensian, in which all of Charles Dickens’ most beloved characters come together as one.

The trailer also shows brief snippets of shows set to return to the channel this year, such as Luther and Sherlock. Continuing shows such as Eastenders and Doctor Who are also alluded to in the showreel, as well as new documentary programmes from the likes of David Attenborough, Brian Cox and Mary Beard.

Watch the Autumn/Winter showreel below.