According to The Wrap, Murray will be playing Brad Radwell, the older brother of Chad Radwell (Glen Powell) who dates Emma Roberts’ central character, Chanel Oberlin. Patrick Schwarzengger (son of Arnold) is set to play the youngest Radwell brother, Thad, while Alan Thicke and Julia Duffy will also star as the boys’ parents. 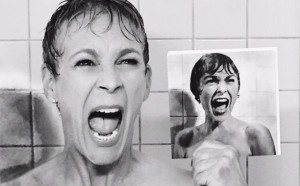 Jamie Lee Curtis recreates the Psycho shower scene made famous by her mother. (image via FOX)

Murray is best known for playing Lucas Scott on the long-running drama One Tree Hill which ran for nine seasons. More recently, he has appeared as a series regular on Marvel’s Agent Carter.

Made by the creators of American Horror Story, the new teen drama takes a look at a female sorority (played by Roberts, Lea Michele, Keke Palmer and Ariana Grande) at an American college campus who are plagued by a serial killer on the 20th anniversary of a prank that went wrong.

Earlier this week, Jamie Lee Curtis – who also stars in the show – shared an image of her recreating the iconic Psycho shower scene (made famous by her mother, Janet Leigh), for an upcoming episode of the show. Curtis tweeted the photo and teased that the scene that would be aired during a “special ep” of Scream Queens.

Scream Queens is set to premiere in the US on 22nd September. A UK airdate has yet to be announced. Watch the trailer below.