Read more
You are at:Home»News»Global News»Trailer for Back to the Future documentary, Back in Time, is released – watch
By Sophie McEvoy on September 11, 2015 Global News, News

2015 is the year for all things Back to the Future to celebrate the original film’s 30th anniversary. Not only will you be able to own the trilogy in a brand new anniversary edition on Blu-Ray this October, but a new documentary is also set to be released looking back on the making of the timeless classic.

The new documentary, entitled Back in Time, is directed by Jason Aron and revisits the cultural phenomenon that the world fell in love with 30 years ago. Aron revisits the film through new interviews with the original cast and crew, whilst also showcasing the legacy and influence that the film has had over the generations. 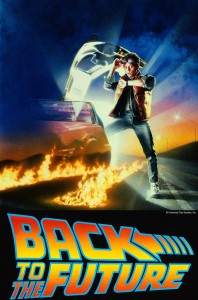 The original film in the trilogy was released 30 years ago.

This is the documentary’s official synopsis:

“The documentary film Back in Time is, at its heart, a look at the very real impact that the Back to the Future movies had on our culture. What was once a little idea that spawned a tightly-focused documentary has grown into something truly amazing over two years of filming. Back in Time is a cinematic monument to the vastness of the trilogy’s fandom. In addition to the footage and interviews revolving around the time machine itself, the crew found that simply by delving into the impact of the trilogy an epic journey began to unfold before them.”

“The crew captured countless hours of footage during filming. From Steven Spielberg to Robert Zemeckis and Bob Gale, to the Sheas and Hollers, and from James Tolkan and Lea Thompson and Christopher Lloyd and Micheal J. Fox, Back in Time features interview after interview that simply must be seen.”

You can watch the full documentary on the trilogy’s 30th anniversary Blu-Ray edition boxset, which is scheduled to be released in October. There has yet been no news on a cinematic/singular release of the documentary in the UK.