Blackpool rockers Boston Manor graced the stage of Southampton’s wonderful The 1865 after an apparent 5 years apart! This shocking fact was a brilliant way to start the sold-out show. Whilst the room was not actually full and only *technically* sold-out, as many fans were sadly unable to attend since Storm Eunice added some unexpected train cancellations, the band still drew the crowd in with their evolution of pop-punk to grunge rock bangers.

Supported by Californian pop-punk brilliance Movements and newcomers Jools, the ‘Welcome Back to the Neighbourhood Tour’, which was postponed since 2020 due to the COVID pandemic, started off with a bang as they played ‘Everything is Ordinary’ – an exciting track from their latest album GLUE (2020). It was obvious from the start of the set how much the band have missed performing live, from the ways in which they constantly reminded the crowd how much we meant to them, to the pure passion that raged through each and every song.

Although the set-list was slightly too short for my liking, perhaps to give more time to the supports or due to changed venue timings, Boston Manor brought a wonderfully varied selection of songs to be performed. ‘England’s Dreaming’ from their 2018 album Welcome to the Neighbourhood was a stand-out as this track really got the crowd pumped. Its grunge-fuelled guitar and smooth vocals contrast so brilliantly with its heavy chorus you could feel the anticipation of moshers waiting their turn to get up and push. Tracks such as my personal favourite ‘Lead Feet’, as well as the intense ‘Bad Machine’ also encouraged the crowd to really get moving and let off some well-needed steam. 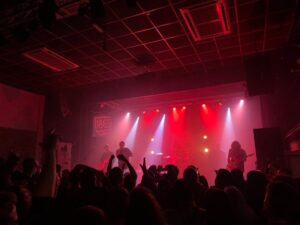 With the storm raging outside, the band made it easy to forget about the weather and instead drew upon its best tracks with only one feeling less powerful than the rest; ‘Liquid’. This was quickly rectified with the fast-paced drum beat intro of ‘Laika’, the song that brought Boston Manor to the forefront of UK pop-punk back in 2016 when they released their stunning debut album Be Nothing.. I last saw the band back in 2018, so I hadn’t had much chance to catch either of their recent albums live so this blend of old and new was a true nostalgia trip for me.

‘You, Me and the Class War’ was a powerful track that relayed perfectly in real life. After hearing the track numerous times when blasting the bands latest album every time I’m in the gym, it felt amazing to capture the strength of their words resonating through the venue. The crowd chanting back against the pressure of love and the links made to the powers that be couldn’t feel more potent if they tried. This track felt like a summary of the tour, and as the song played out to those singing back, the lead singer of Jools joined the mosh pit to be engulfed by flailing limbs. Being played out by ‘Halo’, the band’s most popular track, was a brilliant end, and as Boston Manor highlighted – there’s no point in encores as “everyone knows we’ll be back anyway”.

Boston Manor are always a sight to behold, and whilst the set only had 15 tracks, the energy brought by the band and the crowd made up for it. Frontman Henry sang his heart out and the band played as though they were brand new again, reborn into the ‘post-COVID’ potential of gigs from this moment forward.