A brilliant performance by Australia's finest that showcased their best tracks to a captivated audience.

It’s been a few years since I’ve seen the DMA’S, mainly due to the halting of music because of *that* global pandemic, however, managing to catch the trio perform at the 02 Guildhall just last month has to be one of my highlights of the year. With a jam-packed 18-song setlist, DMA’S (consisting of frontman Tommy O’Dell and guitarists Matt Mason and Johnny Took) lit up the stage for an eager crowd and managed to maintain everyone’s attention from start to finish. 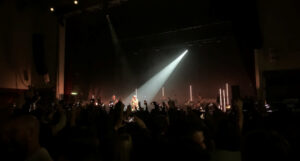 Starting the set with two tracks from their latest album The Glow, which the band hadn’t been able to tour in the UK yet even though it was released some year and a half before, was an exciting welcome to the show. Having never been to the O2 Guildhall before, even though I’ve spent three whole years in Southampton, I couldn’t think of a better band to catch in the stunning venue. Tracks like ‘The Glow’, ‘Criminals’ and ‘In the Moment’ felt as though they were written just for the venue, as the looming columns and decorative roof help the heartfelt emotion of the songs resonate throughout the whole room.

Before this gig, I already knew O’Dell’s voice was stunning, having been able to catch them at a couple of festivals a few summers ago, however, hearing him sing my favourite DMA’S track ever ‘Silver’ to a sold-out crowd of passionate fans was something else. It was clear not everyone in the room knew the song, but this didn’t take away from the draw of the track beautiful melodies that can be enjoyed by anyone. The show was evidence of this fact. 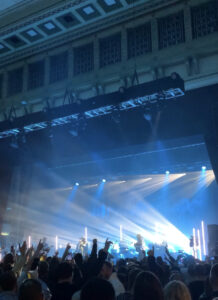 The band played a couple of new tracks which went down a treat. ‘…We Are Midnight’ and ‘Junk Truck Head Fuck’ off their latest EP I Love You Unconditionally, Sure Am Going To Miss You were showcased to UK audiences for the first time since they were released and from my experience were welcomed with open arms. Other brilliant moments included a comedic repetition of the ending to The Glow track ‘Hello Girlfriend’ which got the crowd both confused and amazed as the band played for over 5-minutes rather than the track’s 3-minute runtime.

The encore is always one of my favourite moments in a set, so when the DMA’S re-took to the stage to play my all-time number one track ‘Lay Down’ I knew we were in for some audience excitement. The song, which is likely their most notable, engaged every soul in the room. Even if you don’t know the track, it’s easy to learn due to its catchy chorus, therefore there was not an individual in the room that wasn’t dancing or singing (or likely both).

Overall, the DMA’S put on a show to remember, and I will definitely be catching them again next time they visit the UK, which I hope is much sooner than two years!

DMA’S are still currently on tour. You can find out more and book tickets by clicking here.