George Ezra succeeds in wowing the audience with new songs from upcoming album in special one night gig at Shoreditch Town Hall.

In mid December of last year, George Ezra emerged from his post-festival hiatus with the announcement of a one-night-only gig at Shoreditch Town Hall on January 31st. After releasing ‘Don’t Matter Now’ back in June, fans were eager to hear more from ‘Budapest’ hit singer and the show was sold out by the end of the day.

This show had been highly anticipated for a while due to Ezra’s lack of new music over the past few years. Despite debuting multiple new songs at his brief ‘Top Secret Tour’ last June, they were quickly forgotten due to the absence of studio recordings that tend to follow suit. However, a few days before the gig, Ezra released his new single ‘Paradise’, paired with the announcement that, four years after his debut album Wanted on Voyage, his second album Staying At Tamara’s was set for release on 23rd March.  All these announcements combined with the numerous press interviews and Ezra’s quirky journal entries certainly provided us with high-expectations for this very special comeback concert.

Shoreditch Town Hall itself is a rather small venue, not dissimilar to the likes of KOKO Club. Despite the venue being sold out it was easy to get a good view, and even if you were to arrive with only five minutes to spare you would be able to stand up close. The crowd itself was packed with a completely diverse range of people; young couples, parents, children, and even grandparents . I was surprised to see many of the male spectators sporting suits and ties, and some of the ladies in pretty cocktail dresses, but this just goes to show not only the standard of the venue itself but also the respect the audience have for George Ezra and his band.

As far as the performance goes it’s difficult to find fault, except for a small amount of microphone feedback during a couple of the songs, but this is to be expected from such an intimate venue. Ezra opened with the new single ‘Paradise’, instantly re-introducing us to his typical happy-go-lucky style. Despite it having only been released a few days before, the crowd already seemed to know all the words and were singing along instantly. 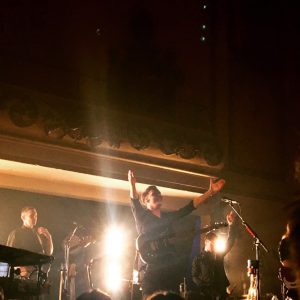 It soon became apparent as to how Ezra manages to attract such a wide range of different people to his concert. Not only is it by creating such melodic and pleasing music, but also in his laid-back and relaxed demeanour. He paused a few times between different songs to share some trivia about the tracks’ origins, and occasionally tell a short anecdote about his worldly travels, but it was hard not to be inspired by his enthusiasm to just zone out for a little bit and immerse yourself in the music.

Many of the songs performed were from the upcoming album – some were very catchy and had similar vibes to some of his older songs, such as ‘Blame it on Me’ or ‘Cassy O’. His new song ‘Shotgun’ for example was particularly catchy, and the crowd had already learnt the chorus by the time the final verse came around. Other songs were more akin to a romantic ballad, such as his new self-proclaimed favourite track ‘Hold My Girl’, and it is needless to say that emotions were certainly high by the end of it.

As the concert came to an end, Ezra explained that it would be difficult to get the band and himself on and off stage for the encore, so we were all going to have to just ‘pretend’ that he was about to play the last song and imagine the encore for ourselves. Ezra’s humour and general happiness can only be described as contagious, and the proof was in the audience, who wore smiles throughout the whole evening, and laughed and danced as if no one were watching.

The whole evening has certainly added to the anticipation for the upcoming album, set to be released on the 23rd of March, which will be followed by a small tour in April. For those who only know him for the chart-topper ‘Budapest’ I would strongly suggest checking out the rest of his music – as Ezra said himself, it’s full of ‘positive juju’ and ‘only good vibes’.

You can pre-order Staying At Tamara’s now via https://store.georgeezra.com/, and watch the video for its latest single below: