Comedian and activist Mark Thomas brought his ‘The Red Shed’ show to Winchester on Tuesday 11th, to celebrate the 50th birthday of the 47-foot-long wooden hut in Wakefield where he performed his first gigs – which also happens to be Wakefield’s Labour Club. 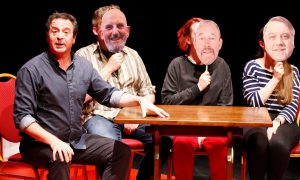 He tells us that he first went as a drama student in his 20s to the working people’s club known for its entertainment and conversations. He’d been radicalised by the miner’s strike of 1984-85; “This is a show about the miner’s strike, but there is no brass band music or kids discovering a penchant for ballet.”

He recalls joining the miners on their march to work at the end of their strike through a Yorkshire village (whose name he can’t remember), and passing a school where children sang the workers’ anthem ‘Solidarity Forever’. It’s poignant and emotive but he doesn’t know if it’s true – he’s retold it so many times that it could all just be fantasy. The show was to find the truth after 30 years, but also about the weight stories hold and how important the truth is. He felt a duty to find out what actually happened, for himself and to make this show.

The show involved six members of the audience holding masks up of six influential members of the story, people from the shed itself and his best friend Peter. This was some very effective theatricality, and brought some levity to certain stories without it actually meaning to. He played recordings of key moments in his journey to find the school; throughout he was contextualising the shed’s role in history and thinking about its future role. 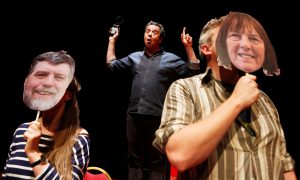 He’s an extraordinary storyteller, taking you from laughing to crying and back again in the space of a sentence. He’ll have you holding your breath and on the edge of your seat in silence and then whisk you back into the story, all while creating for us the characters and environments so vividly. Right at the end where he told us an old woman when asked what she thought about the idea of a new shopping centre being built, responded with ‘they’re not going to take us pound shops, are they’? I and most others laughed initially because the concept seemed funny – why would you worry about those going? And then we realised they were probably all she could afford to shop in, and the laughter is immediately replaced with shock, sadness, anger.

Mark Thomas is one of the most underrated comedians at the moment. And I’m sure you’re all wondering, did he find that school? You’ve got until December 10th to find out!