Read more
You are at:Home»Live»Festivals»Review: Butserfest 2016
By Will Hodgetts on October 18, 2016 Festivals, Live, Reviews

When looking back on 2016, Saturday 10th September will perhaps be remembered as one of the wettest and miserable days of the year. Unfortunately for Butserfest, the sun and heat that had swept across the UK in recent months failed to stick around, instead torrential downpours were on the menu. 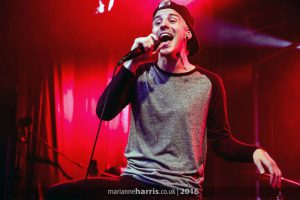 This was perhaps the main reason behind low spirits on both sides of the barriers. The crowds were small across most the stages, however the undercover Crossroads Stage had understandably drawn the biggest audience given the horrendous weather conditions; whilst a lot of the acts performing seemed unenthused, which is a rare sight at a rock festival. This lack of enthusiasm was a real shame because there were numerous great up-and-coming acts on show throughout the day, but the weather was preventing the vast majority of people from really getting involved.

Had the sun been shining and the sky be clear, I have no doubt that Butserfest would be one of the UK’s best small festivals. The setting in a bowl of the Queen Elizabeth Country Park in Petersfield would be stunning had rays of sunshine flooded the landscape, providing a luscious green backdrop to small, intimate main stage. But alas, it just was not to be.

Some acts throughout the day did manage to lift some spirits though. Seething Akira managed to do a great job of opening the aforementioned Crossroads Stage, and they were able to showcase their unique style, a hard-rock/electronic infused sound. It was quite clear that their main influencers The Prodigy and Enter Shikari have had a massive positive effect on their sound. Surrey-based quartet Cavalier also did a great job on the Introducing Stage, a stage which was tough to draw a crowd given its minuscule size and awkward placement amongst the food trucks. 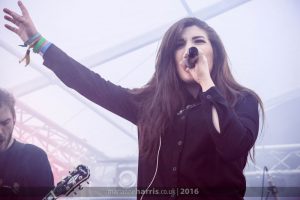 Unfortunately there were few stand out performances on the day, which was another massive shame considering Butserfest’s glowing reputation of showcasing up-and-coming acts and artists from across the different rock genres. Although, as previously stated, I am going to solely put this lack of quality purely down to the awful weather that was experienced. The rain did seem to subside however in time for the big names headlining the Main Stage in the evening though. The vast majority of people that had braved the storm and stuck around for the whole day migrated to the main stage area in order to catch Young Guns before Mallory Knox closed this year’s festival.

The rain subsiding helped to lift spirits, as raincoats started to be taken off and hoods were lowered. This feeling seemed to be reciprocated by Young Guns who were energetic and full of life from the start of their very enjoyable set. I remember seeing them once before when they supported Bring Me The Horizon at Wembley Arena two years ago and they impressed me then in an arena setting, but they impressed me even more in the more intimate, yet open air setting at Butserfest. Frontman Gustav Wood was full of life and was constantly insisting on interaction from the crowd, which certainly helped create an atmosphere that had been lacking for most of the day. The band treated us to a few tracks from their new album, Echoes, which was released a few days after their performance. Each track was well received though, particularly ‘Bulletproof’ which has been used as one of the featured tracks on WWE Monday Night Raw in recent weeks, despite the vast majority of people being unfamiliar with these numbers. It was certainly their older tracks which were received the best, with ‘Rising Up’ from their 2015 record Ones and Zeroes, and the title track from their sophomore record Bones, certainly being the most well received. Wood was keen to thank everyone for sticking it out in the rain and staying to watch them, and I have no doubt that all those that did are glad they did so. 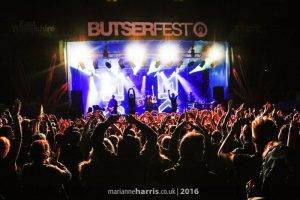 Many were excited to see Mallory Knox, who have played Butserfest in the past and admitted during the evening that they owe a lot of their success to festivals like this one, however they didn’t seem their usual selves when they took to the stage. Frontman Mikey Chapman is usually flamboyant and full of energy, but it seemed that the cold may have possibly gotten to him as he remained quite rigid throughout the first few tracks of the set. Him and the rest of the band seemed to warm up though and they soon got into their groove and into the full swing of things. This was the fifth time I have seen the five-piece from Cambridge and each time they never fail to impress me. Their chemistry on stage is second to none and Chapman’s voice always sounds just as good as it does on the record. Tracks from Asymmetry, the band’s sophomore record which was released back in 2014, all went down a treat, particularly lead singles ‘Ghost in the Mirror’ and ‘Shout at the Moon’, as well as firm crowd favourite ‘Getaway’. However it is always nice to hear MK play hits from their debut album Signals, such as ‘Beggars’, ‘Hello’ and their go-to final song, ‘Lighthouse’. Chapman continually thanked the crowd throughout the set and, just as Gustav Wood had done before him, showed his genuine appreciation to everyone that had stayed the whole day to see them perform. Mallory Knox closed the 2016 edition of Butserfest by blaring out ‘Freed From Desire’ by Gala across the Queen Elizabeth Country Park so the crowd could chant “Will Grigg’s on fire” at the top of their lungs, ensuring that everyone went home with a smile on their face.

It was such a shame that the weather did its best to ruin what I have no doubt would have been a phenomenal day of music and festivities. Young Guns and Mallory Knox did do an awful lot between them to lift spirits and ensure it wasn’t a day wasted, but I can only hope what is one of the UK’s best small festivals manages to see a bit more sunshine in 2017.