A few days after having gone to the festival Soundclash, which has celebrated it’s fourth anniversary, I am still wearing the wristband which tells the world that ‘I’ve been there, done that, liked it so much I wish I was still there’. Someone approached me asking what I had thought of it. ‘It was amazing’ was my reply. ‘Really? I have heard mixed things about it, would you really recommend it?’- let me explain why the answer was an emphatic yes. 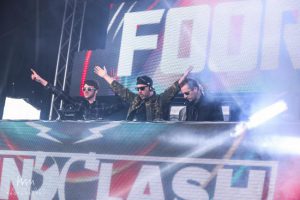 Soundclash pleasantly exceeded my expectations. I had heard great things from people I knew who had gone in previous years but I wasn’t sure what kind of music I should expect and I wasn’t sure what kind of vibe that the festival promised either. I’m pretty flexible in my music taste if Im going to a club or a festival, as long as music that makes me want to dance is playing, I’m not complaining. That is precisely what I liked about Soundclash. The festival was not too big, but it wasn’t too small either, there were 6 different stages to choose from allowing it to cater to different music tastes and every single one made me want to boogey. Even though not every music taste might have been represented, I think that if you are an attendee of any of the main clubs of Southampton and you don’t roll your eyes at chart music in general, there is a good chance you would have enjoyed Soundclash. It wasn’t all about chart music which I appreciated as well. If you like slightly more indie tunes there would have been a place for you there and if you’re more about that electronic music, Soundclash also catered for that. In addition, some of the main acts were massive hits in the 90’s, including Groove Armada and Artful Dodger, also showing how eclectic the festival was.

As the sun set in that slightly chilly end of September evening, the glorious skies showed hues of pink, purple, orange and yellow. Along with the beautiful twilight, the colourful circus-like tents, the fun fair and the general atmosphere instilled in me a sense of satisfaction and I contemplated what a perfect summer send-off it all was. Me and my friend wanted to experience all the different stages, but after a couple of rounds of the different tents and after finding ourselves in the main stage, that’s where we stayed. We both remarked that the music and the atmosphere there kept us glued to the same spot. It seemed like everyone was up for a good time and the DJ’s were doing a brilliant job of pumping the audience up. More and more people joined that stage as the evening advanced and by the time that we finally left it seemed as if everyone had gathered there. Song after song, tune after tune we found ourselves being thrown into a frenzy, both because the vibe was so good and because the songs were so on point. 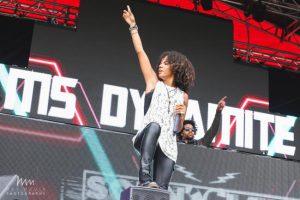 I think all the DJ’s did a wonderful job and highlights for me would have to include Majestic’s and DJ Fresh’s set, both which pumped the audience to the hilt. I also have to comment on the festival’s excellent organisation which I find worth mentioning. Although I had been fretting and worrying about how to get to the concert, I found the free shuttle service easy to book, easy to use and extremely well-organised. Goers of the festival could book the shuttle service which departed at every hour starting in the morning and although you had to pay £5 if you booked a shuttle that departed after 4pm, if people were organised they could benefit from the free transportation. I found it easy to find the service on the day and people wearing yellow vests clearly signalling that they worked for the event organised everyone into buses that took you straight to the venue. On my way back home I found the transportation just as organised and easy to use.

All in all the festival had great music, a fantastic atmosphere and with excellent organisation to top it all, I cannot recommend it enough.