2012 was the perfect time for the Foo Fighters to headline Reading Festival again.

Their 2011 album Wasting Light had been a worldwide smash hit, earning them the best reviews of their career and a slew of Grammys in the process. Fans, both die-hard and casual, had had a year to digest the album and learn all the songs and the band now knew how to structure the perfect setlist with their new material and their old. The Foo Fighters’ popularity was at its peak. On top of all that, 2012 also marked 20 years since the now legendary Nirvana headlining performance at the same festival. Was there a more perfect homage than for Nirvana’s drummer to lead his new band on stage in front of 80,000 people for 2 hours of rock n’ roll? Playing their third headlining show at Reading, Foo Fighters returned this time around as juggernauts, the biggest rock band on the planet here to do what they do best. 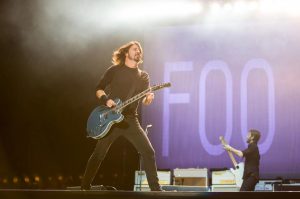 The show started in typical Foo Fighters style; the band ran out on stage, amping up the crowd whilst Dave Grohl screamed into the microphone “This is it… Are you fucking ready?” before launching into a blistering ‘White Limo’. But it was the next song, ‘All My Life’, which sent the crowd into overdrive, with every one of them roaring the lyrics right back at the band. The ferocity of the show simply did not stop as the bland plowed through hit after hit like only they can, showcasing a phenomenal back catalogue filled with classic such as ‘The Pretender’, ‘Learn to Fly’ and ‘Breakout’, with Grohl dedicating the latter to all the “40 something year old fans out there”.

All the while, Grohl bantered with the crowd and had them in the palm of his hand, showing that he really is one of the finest live frontmen in music. He took a moment before ‘Learn to Fly’ to declare to the crowd “Honey, I’m home” before promising a setlist of “A lot that we haven’t done in a long time”. And the fans loved every minute of it. One sat on their friend’s shoulders wearing an Obey t-shirt with the words “I” and “Dave Grohl” written over it, I think they spoke for all of us.

Around an hour in, the band took it down a couple of notches for a moment as Dave dedicated ‘These Days’ to “a couple of people who couldn’t be here tonight… this one’s for Kris, and this one’s for Kurt”. Following this, the band took it old school with ‘Hey, Johnny Park’, ‘Alone+Easy Target’ and ‘Monkey Wrench’, complete with Grohl’s daughter approaching the side of the stage for a mid-song high-five from her dad. 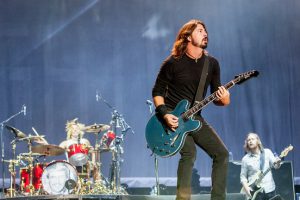 If the setlist had started to lag slightly then it was forcefully brought back to life with a rousing rendition of ‘Best of You’, dedicated to the guy who’s recorded all of Dave’s shows since his Nirvana days, Miti, as he retired. The crowd cried everyone word right back at Grohl, it was a real sight to behold. Dave delved into the past again after this to tell a story of how he joined Nirvana and how he learned of the Reading Festival from Danny, former Nirvana and Mudhoney drummer (side note: quote of the festival goes to Dave Grohl – “Where the fuck did Mudhoney play to 35,000 people?”). It was a touching tribute from the frontman, complete with a birthday song from the crowd for Dave’s mum’s birthday, just as they had back in ’92 for Nirvana. This all led perfectly into ‘Times Like These’.

The band then really took it old school after this with a four song streak of ‘Winnebago’, ‘Wattershed’, ‘For All The Cows’ and ‘Exhausted’ before closing out proceedings with, well… what else would close a show like this? ‘Everlong’ of course. The biggest and best song in the band’s arsenal brought the show to a close and capped off the weekend in an explosive and touching way.

The band played a show for the fans, and it was perfect. Anticipation was high for this performance and the guys delivered in the best way possible.